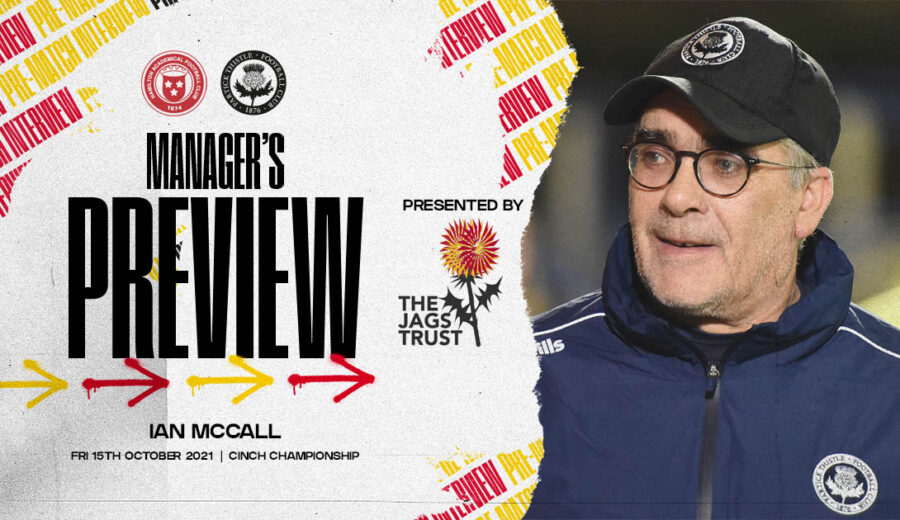 Partick Thistle return to league action this week as they head to the Fountain of Youth Stadium for their final game of the first round of cinch Championship fixtures. Hamilton Accies are the opposition and the Jags know a Friday night win would send them back into the top four at the expense of Raith Rovers ahead of Saturday’s games. Both sides come into the clash off the back of wins in their previous league matches with Thistle handily dispatching of Ayr United at Firhill a fortnight ago while Hamilton were 2-1 victors against league leaders Inverness in their most recent Championship contest. Jags boss Ian McCall spoke to ptfc.co.uk ahead of the game:

“This is a game with a lot riding on it for us. If we can win it then we feel like that will have been a pretty good start to the season but if we lose and teams above us pick up points on Saturday then we’ll be left very disappointed.

“It’s just as important for Hamilton though and they’ll be keen to build on what was a very impressive win over Inverness a couple of weeks ago so I think it’ll be a tight game, it tends to be that way when you go to Hamilton, and we’ll need to be prepared for a tough match.

“We played brilliantly in our last league game and then were obviously disappointed with how things went against Queen of the South albeit we felt we controlled large parts of the game but we have to put those games behind us now and focus on performing well against Accies.”

The Jags currently sit six points ahead of second bottom and just four points off second top which McCall says typifies the competitive nature of the Championship.

“Yeah, it’s still very close right throughout the league and I think it’ll probably stay that way for a while yet. The thing is for us, we feel like there were points there to be won in the games we’ve lost so we could be even closer to the top of the league but we can’t dwell on that, we have to look forward and there’s another chance for three points against Hamilton this week.”

With it being so close from top to bottom in the division at the moment, the gaffer knows the importance three points on Friday could have for his side.

“We’ve said all along that we want to be in that top four but that’s going to be a real challenge. We lost three games in a row which lost us some ground on a few teams but getting that big win against Ayr got us back on track. Despite that, there are still teams like Hamilton who aren’t that far behind us and will still definitely fancy their chances of getting up into the play-offs as well so we need to make sure we keep getting points on the board.”

To finish, McCall gave us an update on team news ahead of the trip to the Fountain of Youth Stadium.

“It’s just Darren Brownlie, Steven Bell and Harry Stone who are out at the moment. Steven Bell had a bit of a set-back with his injury and we’re going to have a chat about how to progress with that next week. As for Harry, he picked up a little knock a couple of weeks ago which he’s recovering from. We hope to have him back training next week.”