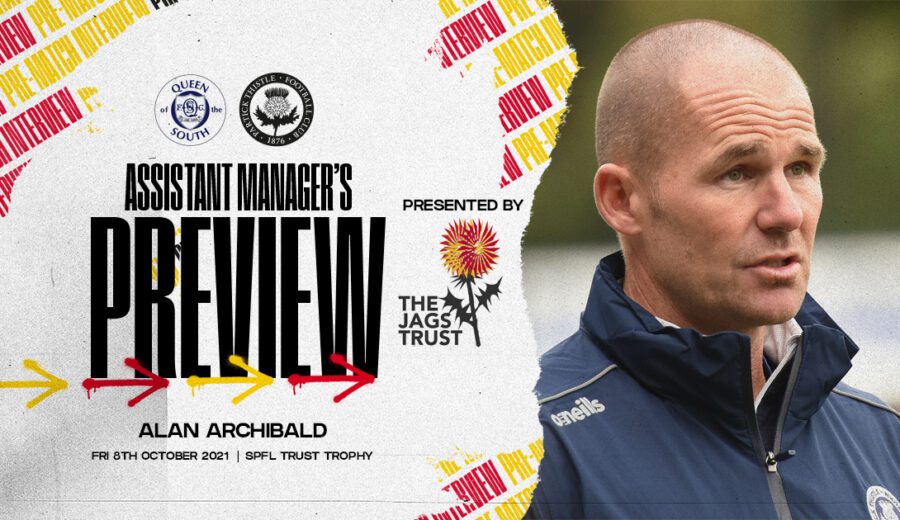 It’s time for the third round of the SPFL Trust Trophy this week as Partick Thistle seek to reach the quarter-finals of the cup. If the Jags want to progress to the last eight, they’ll have to get a result from Palmerston Park as they face Queen of the South for the second time this season. The two teams previously met on the opening day of the cinch Championship season with Scott Tiffoney’s 85th minute winner deciding an end-to-end contest that afternoon. Thistle assistant manager Alan Archibald spoke to ptfc.co.uk ahead of the game:

“After last Saturday’s win against Ayr everyone’s itching to get back out there again and we just want to carry all the things we did well in that game into this one. Queens are a really good side who got an important win last week and they gave us a good game when we played them in the league earlier this season so we know it will difficult but we’re hopeful of progressing.”

Reflecting further on last weekend’s 4-0 win over Ayr United at Firhill, Archie said the management team were delighted with just about every aspect of the performance.

“Ayr came into the game in good form so to go out and win by four goals is some effort from the boys. They made it very tough for us during the first half hour or so but I think you saw us kick on after we got that first goal.

“The game opened up a bit more in the second half and we could have scored a couple more goals than we got. Scott Tiffoney was brilliant with the crosses he was putting into the box and it made for a pretty comfortable win in the end.

“Defensively, we were very happy with the way the back four worked together. We shuffled things about a bit and it worked for us with Tunji and Lewis Mayo in the centre. The whole back four were doing all the basics right with getting blocks in and stopping crosses and that was very pleasing to see for us.”

Looking back to this week’s fixture, Alan reckons both the Jags and the Doonhamers will be looking to dominate proceedings following their respective wins last Saturday.

“They’re a team who tend to be quite attack-minded with plenty of pace and energy up front so it’s got the makings of quite an open game which was the case when we last played them. I think everyone knows at this point that we like to be on the front foot too, creating chances and scoring goals, so it could be an exciting game.”

In recent years, the Maryhill men have made it to the semi-finals and the final of the Challenge Cup and Archibald says the Jags are hopeful of going a long way again this season.

“There are a lot of different opinions on this competition but we remember how good it was to get to the final when we managed that and you want to be a part of those sorts of runs. Once you start to get to the latter stages, you feel like you’ve got a real chance of winning it all and we’re just one game away from the quarters so we want to go all the way.”

To finish, Archie gave us an update on team news ahead of the trip to Palmerston Park.

“As far as injuries are concerned, there hasn’t been anything new at this point. However, Jake Hastie will miss it because he’s cup-tied and Lewis Mayo is away with on international duty so he’ll also not be available.”

Exclusive video interviews with Cammy Smith and Thistle assistant manager Alan Archibald will be available for JagZone subscribers to watch today – log in to view.

There will also be a pay-per-view option provided by the home side, priced at £10, for any supporter who wishes to watch a livestream of the match – click here for more info.