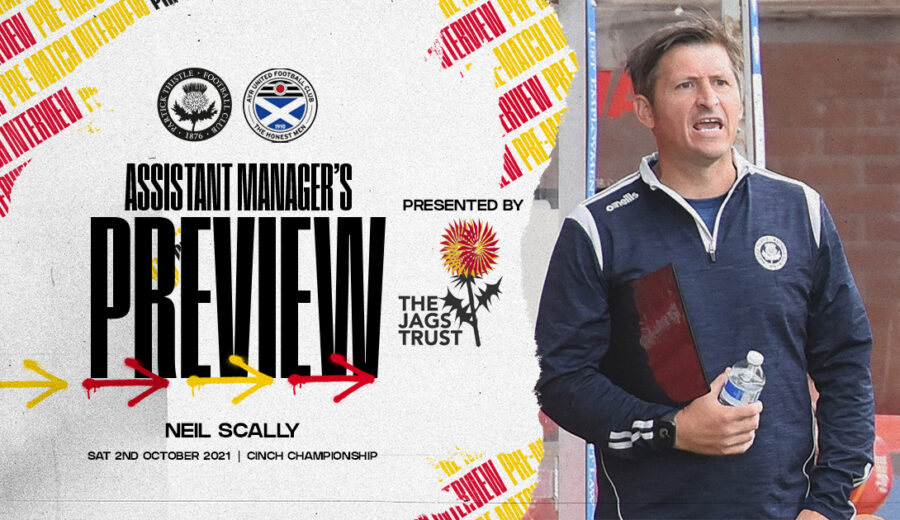 It’s back to Firhill this Saturday for Partick Thistle to take on Ayr United, as they look to end a three-game losing streak in the cinch Championship. The Jags most recent fixture was a 3-2 defeat at Stark’s Park against Raith Rovers while Jim Duffy’s team come into this weekend’s game off the back of a 0-0 draw with Greenock Morton. Thistle assistant manager Neil Scally spoke to ptfc.co.uk ahead of the game:

“We’ve prepared well for this one. Obviously, the past few games have been really disappointing for us but we’ve now got another chance to get back on track in front of our own fans so our focus is all on making sure we put on a good performance against Ayr.”

The Jags had a slightly unusual Sunday afternoon game last weekend as they were beaten by Raith and Neil gave us his thoughts on that performance.

“It was a mixed game for us, there were some good things and some bad. They started the better of the two teams to be honest but we were happy with the way we came into the game towards the end of the first half and into the second.

“We felt we were controlling the play for the most part and we did have a few chances but we gave away sloppy goals which you can’t afford to do at this level. Eventually we did get a couple of goals and if there had been another five minutes to play then maybe we’d have got a point but there was no time and we can only blame ourselves for leaving it that late.”

Despite the fact that the team have lost three straight games, Scally reckons the team have been able to take some positives from each defeat.

“We know we need to be getting results but when we look at these games, we’ve had spells in each of them where we’ve played well but maybe just not capitalised and as I said earlier we’ve let in too many cheap goals. So, the plan for us is to just get better in these key moments at both ends of the pitch; taking chances when we’re on top and cutting out the little mistakes that are costing us goals.”

Taking on Ayr this weekend, who are just a single point behind the Jags in the league table, Neil says he’s expecting a really tough contest.

“You know it’s going to be a really difficult game against anyone in this division at the moment. We’re happy to be at home though on the big pitch and hopefully we’re able to play our game the way we’ve shown we can in certain matches.”

To finish, Scally gave us an update on team news ahead of match eight of the league season.

“In terms of team news, the only change is Jake Hastie who just missed out last weekend. He’s been back in training this week which will have done him a lot of good and he’ll be back in contention for a place in the squad. Apart from that, it’s as we were.”

Exclusive video interviews with Shea Gordon and Thistle assistant manager Neil Scally will be available for JagZone subscribers to watch today – log in to view.

JagZone subscribers will be able to tune in to live audio commentary for our clash with Ayr United, starting at 2:30pm – click here to tune in.