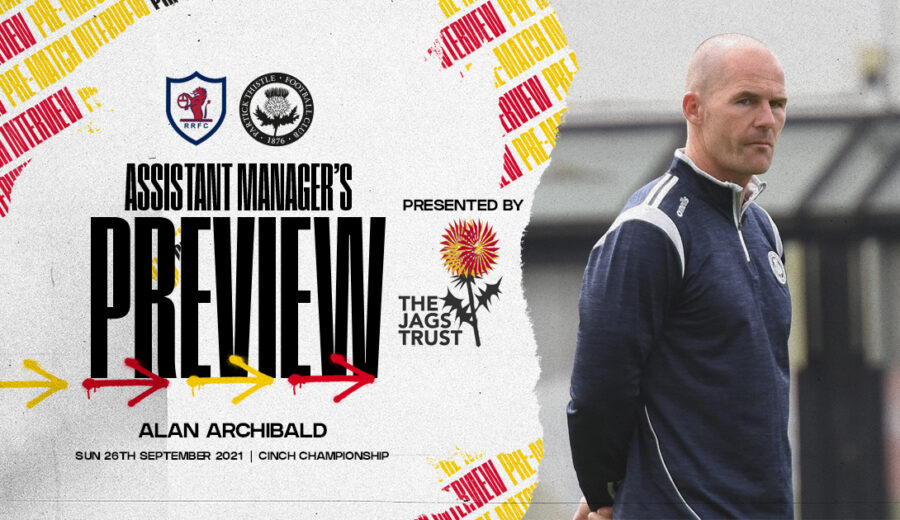 Partick Thistle look to get back to winning ways this weekend as they travel to Kirkcaldy to take on Raith Rovers in the cinch Championship. The Jags haven’t visited Stark’s Park since 2013 and they’ll be hoping to make it a winning return after consecutive defeats in the last fortnight. Just two points separate the sides heading into the contest with the Maryhill men knowing a win would maintain their top four status. Thistle assistant manager Alan Archibald spoke to ptfc.co.uk ahead of the trip:

“We’ve prepared well this week but it’s going to be another real tough game. They’re a team who are right behind us in the table and showed what they’re all about last season by getting into the play-offs.

“They’re a team who are quite unique in this league with the way they attack. Their full-backs are always on the front foot offering an added threat from the wide areas and they put you under a lot of pressure with that starting from the back.”

Archie took a second to reflect on last Saturday’s loss to Kilmarnock which represented Thistle’s third defeat of the Championship season.

“There were plenty of things to work on from that game. We felt we were on top to start the match but maybe just struggled to create chances. Killie came back into it towards the end of the first half but overall there wasn’t much in it before half-time.

“Coming out for the second half, we didn’t deal with them for whatever reason and they played extremely professionally once they got themselves in front. I think we look at both goals as ones we could have prevented but we now just have to get that out of our system and look to bounce back this week.”

Alan then highlighted the importance of getting more points on the board to ensure that Thistle don’t slip down the table as the teams just behind look to catch up.

“We’ve lost two in a row for the first time this season and you don’t want that to become three because with each loss it becomes harder to get back to winning football. The game against Kilmarnock was probably the most disappointing of the three losses we’ve had and I think we’ve seen this week that the boys are keen to put it right.

“This league is so competitive that one run of results one way or the other can make a massive difference to your league position and that’s the case for us too. We got ourselves up near the top early on but you need to keep winning to maintain that.”

Finally, Archie gave us an update on team news ahead of the game against the Rovers.

“There’s nothing new at the moment. Jake Hastie missed last week’s game after rolling his ankle but we’re not sure whether he’ll make Sunday; we’ll have to wait and see how he is tomorrow. Apart from that it’s as we were last weekend.”

There will also be a pay-per-view option provided by the home side, priced at £14, for any supporter who wishes to watch a livestream of the match – click here for more info.