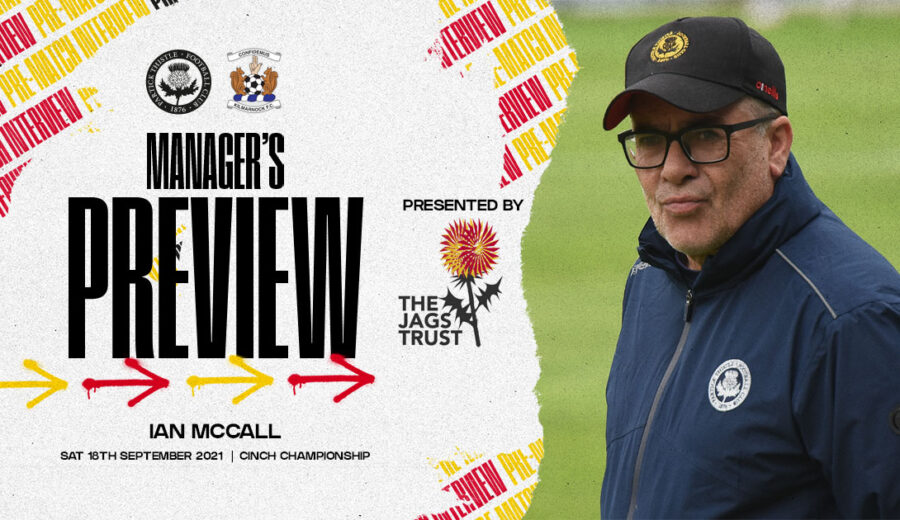 Partick Thistle return to Firhill this weekend as they take on Kilmarnock in cinch Championship action. The Jags dropped to fourth place last week following defeat to Inverness while Killie climbed up to second after a win over Greenock Morton, however, the Maryhill men know they can go back level on points with Tommy Wright’s side with a victory tomorrow afternoon. Thistle boss Ian McCall spoke to ptfc.co.uk ahead of the clash:

“We’re expecting a really difficult game against Kilmarnock. Naturally they’re one of the favourites to win the league having come down from the top flight and you can see plenty of quality in their squad.

“Every game is difficult in this league though; we know that. There’s not much between any two given teams and it makes for an interesting division. What it also means is we go into each game believing we can get the win and that’s the aim for us this weekend.”

Having had time to reflect on last Saturday’s loss to Inverness, McCall says his team now have to put it behind them and focus their attentions on Kilmarnock.

“It was a disappointing result of course and the fact that we caused problems for ourselves made it even more difficult to take.

“We had a big chance to go two up in the first half and we made a couple of costly mistakes in the second half but, to be honest, we don’t want to dwell on it too much. The focus is now on getting back on track this week.”

Taking a second to look at the bigger picture of the league campaign so far, the gaffer spoke of how the first five fixtures have given him optimism about the possibilities for this season.

“Looking back on the games we’ve had so far, we feel like we could have won the two games that we lost. Just now we’re sitting on three wins out of five and that’s a good start for us but, as I say, it could have been even better. We know we don’t have a divine right to beat anyone in this league though so each result is hard-earned.

“We’ve got a group of players who are determined to do well and we’ve set off on the right foot. We want to be up near the top this season and that’s where we are at the moment so hopefully we can continue that going forward.”

The injury list at Firhill is a lot shorter than it was at this time last season and the manager is glad to have a few difficult decisions to make before each game.

“Our squad is slightly on the smaller side but we feel that everyone in the squad is good enough to be a starting player for Partick Thistle so that does create a few headaches when most of the squad is fit.

“Ciaran McKenna came back into the squad last week which was great and Stephen Hendrie should be involved in the squad this weekend so it’s only going to get more difficult for me but ultimately that’s not a bad problem to have.”

Exclusive video interviews with Lewis Mayo and Thistle assistant manager Neil Scally will be available for JagZone subscribers to watch today – log in to view.