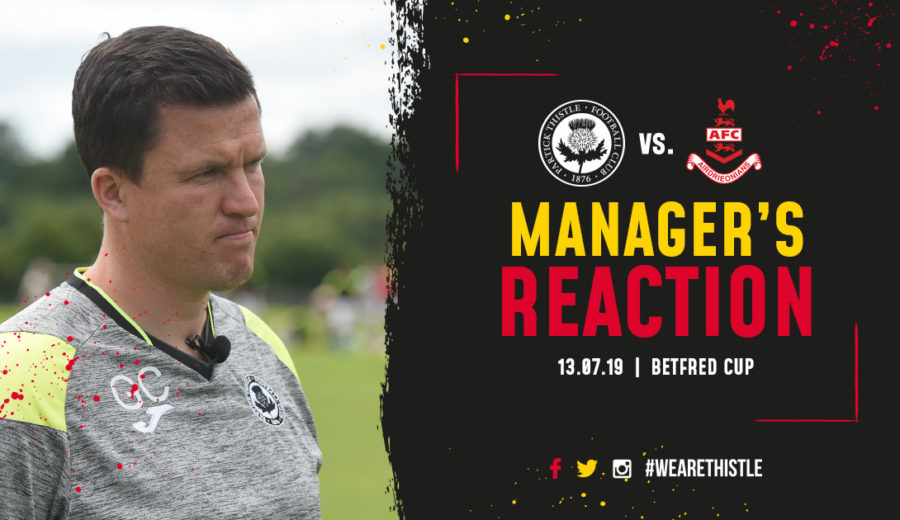 The Betfred Cup Group F kicked off earlier today for Partick Thistle as the Jags hosted Airdrieonians at the Energy Check Stadium at Firhill. A tightly contested match, it took until the 66th minute for the deadlock to be broken when James Penrice’s corner deflected into the net off Diamonds defender, Sean Crighton. Five Thistle players made their debuts including Thistle Weir Academy graduate, Evan Galasso, who came on as a second half substitute for Lewis Mansell.

The win sits the Maryhill men at the top of their group ahead of Tuesday’s clash with Queen’s Park. Jags boss, Gary Caldwell, spoke to ptfc.co.uk following the final whistle and began by summarising his feelings after game one of the 19/20 season.

“I’m just glad we got the win. One of the big things we’ve spoken about in pre-season has been that winning mentality and a desire to keep pushing to win games. I thought, though, we weren’t perfect by any means today but we were the team on the front foot.

“In the second half, we upped the tempo a little bit and created a lot more than we did in the first half. Their goalkeeper made some great saves and we were knocking at the door. When we did get that goal, I thought we were comfortable.”

The manager paid tribute to Tam O’Ware who made his return from injury today after 10 months out.

“Tam’s been excellent since I’ve been at the club with his attitude and the way he is around the dressing room but to get him on the pitch is brilliant. He showed his leadership qualities, his ability on the ball and it’s great to have him back playing well.”

Gary gave us some insight into what he’s hoping new signing, Alex Jones, will bring to the team.

“He adds more quality and competition to the top of the pitch. We needed to strengthen the striking options and Alex will be a great addition. I met him last week and he’s also the right type of character to add to the dressing room.

“I’d seen him playing while I was down in England and when he became available we looked into signing him. Gerry’s worked very hard to make it happen as he was sought after by a few English clubs so to be able to bring him to the club is great news.”

The gaffer also said that he’s hoping to get more business done in the near future.

“We’re hoping to get more deals done soon. We’re in talks with a couple of players at the minute and while they’re not ones that will happen this weekend, we’re hopeful that we can complete another couple of deals next week.”

A more in depth video interview with Gary Caldwell will be available shortly to Jagzone subscribers and will be followed by reaction from Ryan Williamson and Tam O’Ware – log in now to see them.