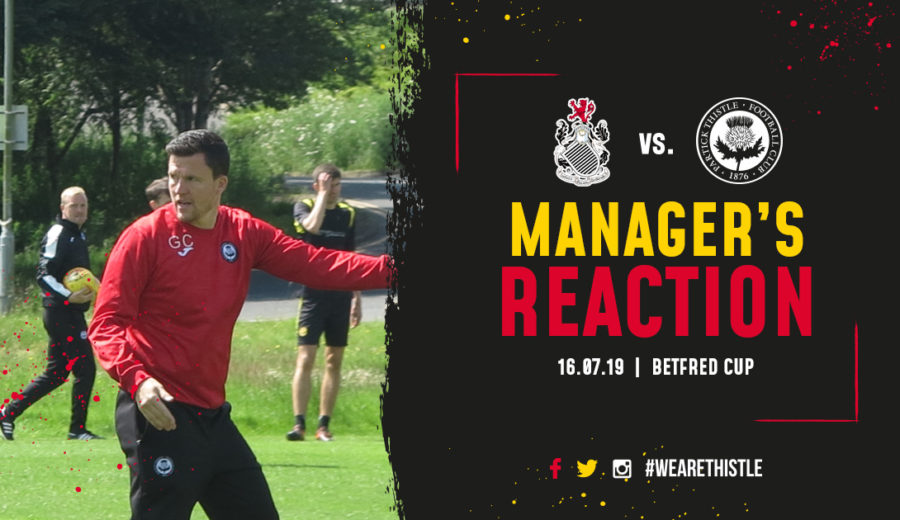 Partick Thistle continued their winning start to the 2019/20 season with a 2-1 victory against Queen’s Park this evening in Airdrie. The Jags hit the front after just five minutes as Kenny Miller bagged his first goal in red and yellow before Tommy Robson did the same to make it 2-0 in the 34th minute. Salim Kouider-Aissa pulled one back for the Spiders 11 minutes after half-time but Mark Roberts’ side failed to really put Thistle under much pressure thereafter as the visitors saw out the victory. Jags boss, Gary Caldwell, spoke to ptfc.co.uk after the match:

“Ultimately, we’re not long removed from pre-season but we’re showing a great mentality to win which I’m delighted with. Are we completely happy with how we played? No and we know we need to improve but we’ve now won two games in this group which puts us in a fantastic position to progress.”

The manager felt his side struggled to play the football he wanted them to play at times during the game, partly down to the condition of the pitch.

“It was tough, to be honest, to play passing football. It was dry and sticky on the surface and that made it tough to move it quickly enough. We were quite effective with the ball down the channel, but I still feel like we could have down more between the lines even with the poor conditions.”

Caldwell complimented Thistle striker, Kenny Miller, who got off the mark for his new club this evening with a well-taken left-footed finish from 15 yards.

“It was a great finish on his weaker foot and I was very happy to see him get his first for Thistle. He’s got a big part to play for us this season so I was delighted with his contribution. Also, to get Alex Jones some minutes was good. I think he showed some of his talent while he was on through his touches and runs so hopefully he’ll have more of that to show soon enough.”

Miller came off in the second half to be replaced by the aforementioned Jones and as he left the field he was limping slightly but the manager told us that it was nothing serious.

“Both Kenny and Joe Cardle were carrying slight niggles ahead of the game but both of them were able to play significant minutes which is good. Obviously, we’ll access both of them again later this week but we hope neither of them will miss time because of the knocks.”

All focus is now on Hamilton for the gaffer as Thistle look to further consolidate their position at the top of Group F.

“It’s another game and we just have to approach like any other. They’re the top-flight team from the group and it’s away from home so it’ll be particularly tough but we want to see improvement. We’ll look at tonight’s game and hopefully another 90 minutes for some of the boys will have done them good and we’ll be closer to where we want to be on Saturday.”

A more in depth video interview with Gary Caldwell will be available shortly to Jagzone subscribers and will be followed by reaction from Kenny Miller and Tommy Robson.