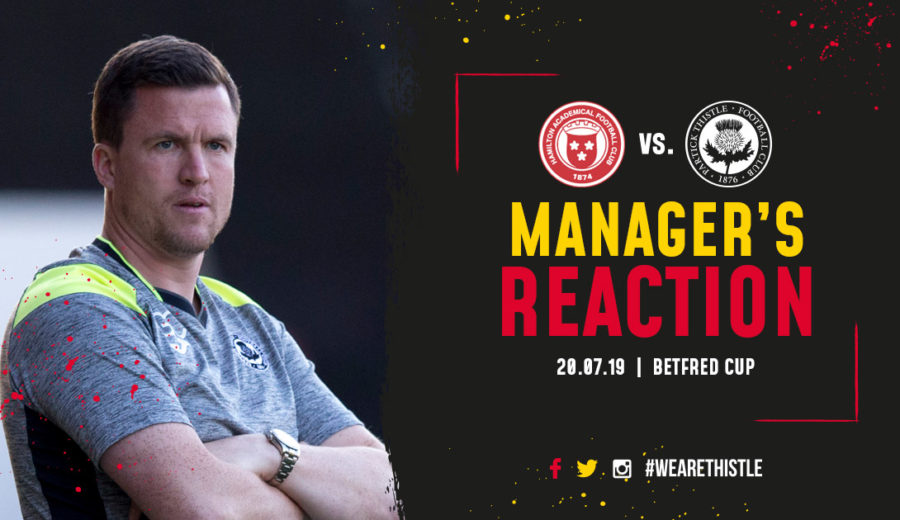 Thistle hit the front first as Ryan Williamson bagged his first Jags goal on 16 minutes but the visitors’ lead lasted for but 60 seconds as Ross Cunningham immediately struck back for the hosts. Cunningham was on target once again eight minutes into the second half before Shea Gordon restored parity with 17 minutes to play.

Hamilton did have a penalty in the 75th minute but Aaron McGowan blazed it over, sending the teams to a full set of spot kicks from which Accies emerged victorious by six converted penalties to five.

Jags boss, Gary Caldwell, spoke to ptfc.co.uk after the final whistle, beginning with a summary of the match from his point of view:

“I think it was an entertaining game of football for neutrals. I thought we played well; especially in the first half when we really dominated the game. We should have been in front at half-time but, second half, they changed their shape and we were too slow in getting to grips with that which is the big lesson we learn from the game.

“After some time though, we did work it out and I felt we were the stronger team for the last 15 minutes and we really caused them problems late on. We put three strikers on the park and tried to win the game, unfortunately, we weren’t able to but I was still pleased with the display.”

Hamilton scored within 60 seconds of Thistle’s 16th minute opener and when the Jags made it 2-2 late in the game, Accies had a penalty before two minutes had passed. The gaffer told us that these momentary lapses in concentration will be an area to work on for the Maryhill men.

“Those incidents were very frustrating for me. In the first half, they didn’t really create that much, we scored the goal, switched off and allowed them back into the game. We spoke about that at half-time but in the second half, we made the exact same mistake so that’s something we’ll look to fix very quickly.

“It is that time of the season when there will be little issues like this one that we’ll need to brush up on. We’re still developing as a team but I saw a lot of positive things again today and I think that was our best performance of the three so far, albeit we weren’t quite able to get the win.”

Gary then went a bit more in-depth on the changes Hamilton made at half-time and how his side responded to those alterations.

“They went to three-at-the-back so we went to three up top. I think we became slightly anxious as a team after their change and I’ve said to the boys, we’ve got to be quicker in adjusting and working out what we’re up against.

“We needed to play fewer passes in our own half and get more up to the guys in attack and our second goal was perfect example of that. Raffa De Vita played it up, we won the ball, fed it wide, crossed it in and we score from the midfield runners. We had more opportunities to score from those sort of scenarios as well.”

A more in depth video interview with Gary Caldwell is available to Jagzone subscribers now as well as reaction from Scott Fox and Ryan Williamson.