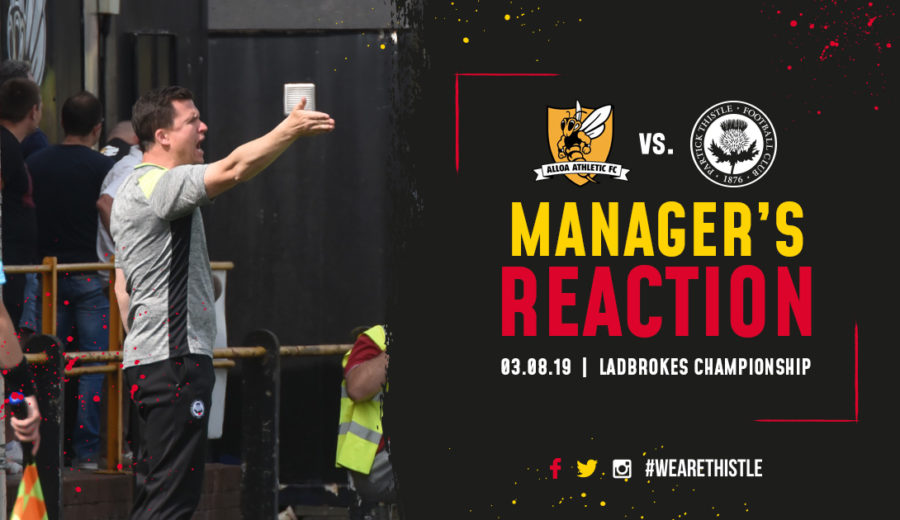 The new Ladbrokes Championship season began this afternoon for Partick Thistle as the Maryhill men travelled to the Indodrill Stadium to face Alloa Athletic. After topping Betfred Cup Group F, the Jags were hoping to kick-start their league campaign with victory over the Wasps with the sides battling to a 1-1 draw. The hosts began much the better side and took a deserved lead in the 33rd minute as Steven Hetherington’s long-range effort deflected in off Steven Saunders. However, Gary Caldwell’s side came out with a bit of extra energy in the second half and were rewarded with a goal as Joe Cardle followed in for the rebound after his own header was saved onto the post by Neil Parry, slamming the ball home from a matter of yards. Both teams looked for the winner but there was no more scoring to be done as the game finished level and both sides took a point from matchday one. Jags boss, Gary Caldwell, spoke to ptfc.co.uk after the match, beginning by summarising the match from his view:

“It’s a disappointing performance. We were poor, even in the second half and I didn’t see that coming. It gives me a good idea of where we are as a team and what we need to work on next week.

“Alloa dominated the ball in the first half and we had a plan to stop them which didn’t work and I’ll take responsibility for that. However, I didn’t see enough effort in that first half which is unforgivable. We were standing off people, we weren’t moving into space and we didn’t ever really get to the levels we want from the players.”

Although he was still not happy with the team’s second half display, Caldwell was pleased to see his team threatening the Wasps’ goal after the interval.

“Their ‘keeper made some cracking saves. We came out after the break on the front foot and after a minute I think you could see something in terms of effort and drive that we didn’t in the first half.

“We told them what we thought at half time in no uncertain terms and I think that had an effect but it shouldn’t take that; we should be ready to go from minute one and we weren’t today which isn’t good enough.”

With a tough fixture at home to Dundee United next Friday the manager knows there’s a lot of work to be done to get ready for that match after today’s poor showing.

“We have to improve, it’s as simple as that. There were some positives today but we can’t paper over the cracks and pretend performances like that are going to get us anywhere near where we want to be.

“It happens in football, you have bad games but we need to learn from today and make sure we come back stronger against United.”

A more in depth video interview with Gary Caldwell will be available to Jagzone subscribers shortly as well as reaction from James Penrice and Joe Cardle.

Highlights will be available to view at midnight and will be free for Jagzone subscribers.