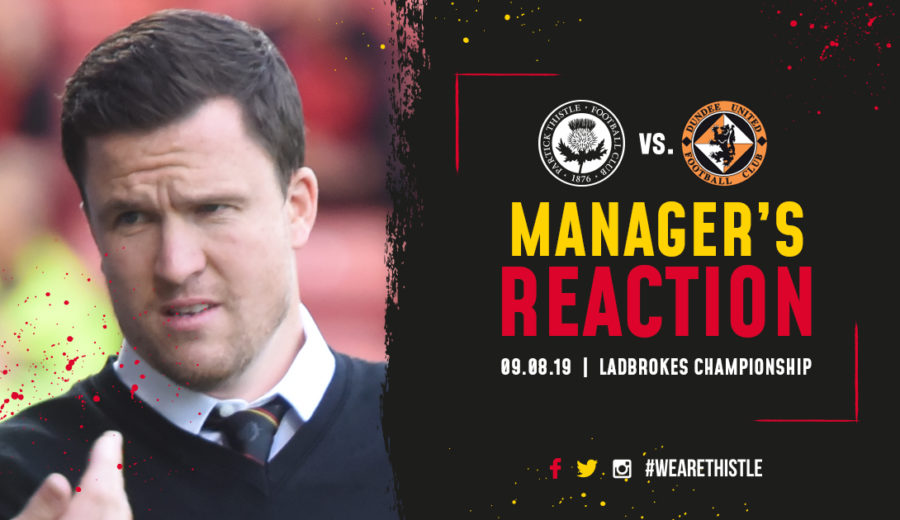 Partick Thistle played their first home game of the league season this evening as Dundee United visited Maryhill. The Jags managed a 2-1 win over the Tangerines back in March but unfortunately the result was reversed this time round. The hosts had taken the lead through Steven Saunders’ header but goals in the second half from Lawrence Shankland and Peter Pawlett turned the fixture on its head, earning the travelling Terrors all three points. After the game, Gary Caldwell spoke to ptfc.co.uk about what was an ultimately disappointing result:

“We did well in the first half but let it slip after half-time and you can’t do that against a team like United. We lacked some bravery and composure at times which was a step back from the first half and we were made to pay the price.”

The gaffer wasn’t happy with the nature of the goals conceded with both coming as a consequence of Lawrence Shankland getting too much space.

“It’s something we worked on during the week; making sure we marked Shankland and in the key moments we didn’t do it properly. It’s not rocket science, he’s a big danger in the box we let him find the space. His goal was a bit fortuitous with the way he hit it but we have to look at the way we defended the cross and improve.”

It was particularly frustrating for Caldwell to see his team take the lead but then be unable to take anything from the match.

“When we’ve played as well as we did first half, causing them some real problems and taking the lead, the game is there for us to take. We needed to manage the game and continue on the front foot but instead we were inviting pressure and letting the ball into box which is always going to lead to goals.

“In that first half we had spells when we were really good with the ball. We were winning the ball in good areas and the game plan was working so I definitely saw an improvement on last week’s game but there’s still plenty of work to be done.”

The gaffer was complimentary of summer signing, Alex Jones, who started his first game for the club today and impressed during his time on the pitch.

“I thought Alex really showed his quality today. The first touch he has and the positional awareness are great assets to have in a striker. He ran out of steam a bit in the second half but he’s still playing catch-up in terms of fitness levels and hopefully there’s plenty more to come from him.”

Gary finished by looking ahead to next week’s Betfred Cup tie against Ross County.

“It’s a cup game which gives us a chance of reaching a quarter-final which is always exciting but we have to treat it as a normal game. We’ll dust ourselves down after tonight, get back in on Monday and then focus on improving on the performance once again.”

A more in depth video interview with Gary Caldwell is available to Jagzone subscribers now and reaction from Alex Jones and Steven Saunders will be online shortly.