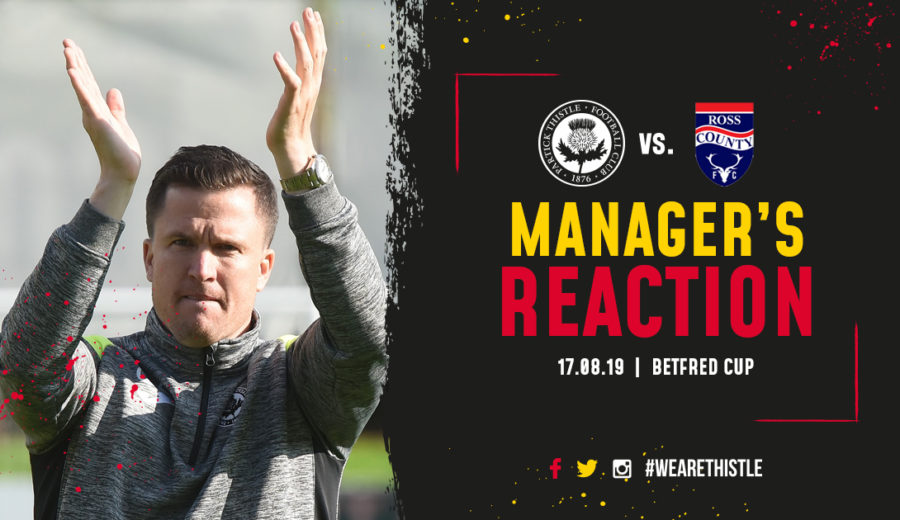 After two games without a win in the league, Partick Thistle returned to Betfred Cup action as they looked to get back to winning ways against Ross County. The visiting Staggies came into the game in excellent form having won five and drawn one in their first six games of the 19/20 campaign, however, when all was said and done it was the Jags who had booked a spot in the cup’s quarter-final stage. Blair Spittal opened the scoring on his first visit back to Maryhill after leaving Thistle in the summer to give County the lead in the second half but a Kenny Miller strike in the 80th minute took the contest to extra-time. Thistle looked the better of the two sides at the start of the bonus half hour and were rewarded as James Penrice curled a free-kick home off the inside of the post to put the home side ahead but the Staggies struck back through substitute Harry Paton who showed great composure to slot the ball past Scott Fox from a tough angle in the 105th minute. There was one more goal to be scored and it came for the Jags as Steven Saunders headed home a James Penrice corner to make it 3-2 and to send the Maryhill men through to the last eight. Jags boss, Gary Caldwell, spoke to ptfc.co.uk following the final whistle beginning by summarising a dramatic 90 minutes.

“I’m absolutely delighted with that and it’s the performance more than anything. We’ve worked extremely hard this week at being more aggressive as a team and playing on the front foot. Trying to play the game our way and dictating the flow of the match which I felt the boys did well today in spells against a Premiership team who I think will be comfortable in the top flight this year.

“For them to go a goal behind and keep believing in what we are doing and then get back into the game; it was terrific. Then, in extra time, with both teams tiring, I thought we had the edge mentally and physically and we didn’t give them a second to catch their breath which I feel was a big part of what won us the game, in the end.

“The players were giving their all with headers, clearances, blocks and everything else and I feel like the fans really bought into that and you could feel a real positive energy coming from the stands as the game went on. It wasn’t a great performance from start to finish but the supporters stuck with us all game long and it felt like everyone was pulling in the same direction today.”

The gaffer then expanded on his point about the players leaving everything on the pitch by discussing the importance of effort in the performance.

“We had great energy throughout the match and that aggression that I talked about. We gave away the most fouls in a game since I’ve been here which tells me we were getting close to County and putting them under pressure which is great.

“To go along with that, we had quality and for spells we played great football. They’re a good side too and they came back into it but after their goal, it was relentless; the way we came at them and fought for second balls and, to be honest, I thought we could have won it before the 90 minutes were over.”

Now the Jags await the quarter-final draw to see who they’ll face next in the Betfred Cup but Caldwell knows that whoever they do end up facing it’s going to be another tough test as Thistle look to reach Hampden.

“I said to the players after the game; enjoy this feeling, it’s what you work for as a footballer but you have to come back down to earth. There were still aspects of that performance that we can improve on and we’ll continue to work with the players to get better so that when that quarter-final comes around, we’re ready to win it whoever it’s against.”

A more in depth video interview with Gary Caldwell is available to Jagzone subscribers now and reaction from James Penrice and Steven Saunders will be online shortly.