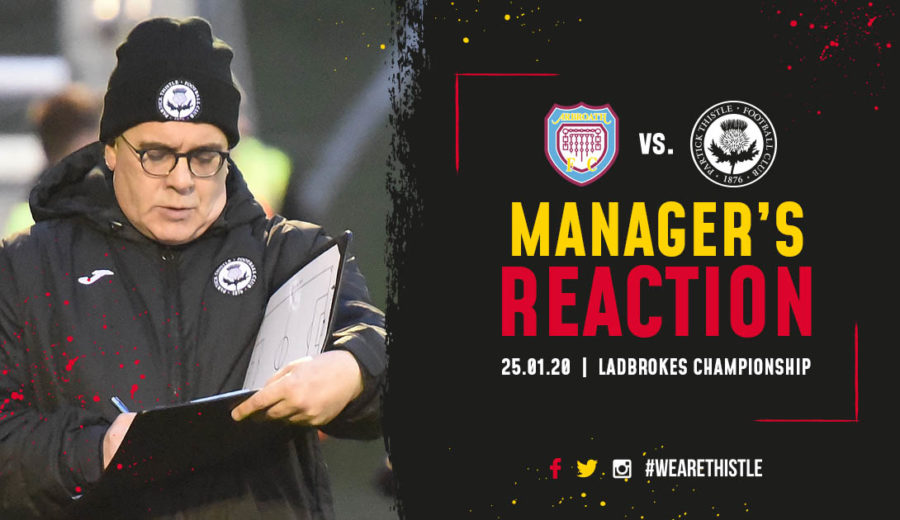 It was defeat in Angus or Partick Thistle as they were beaten by Arbroath for the second time this season. The Red Lichties raced into a two-goal lead early in the contest with goals from Michael McKenna and Craig Wighton as the men from Maryhill struggled to deal with the hosts’ endless pressing. There was more of the ball for the Jags in the second half but they failed to create much except a consolation goal, scored by Brian Graham, in injury time by which point it was too late for a comeback. Thistle boss, Ian McCall, spoke to ptfc.co.uk after full-time:

“First and foremost, Arbroath deserved to win the game. They came out for that first half really up for it, with the wind and their back, and they used it well. Their set-piece delivery was superb but they’re still poor goals to concede from our view.

“Second half, I thought we started well enough and looked like we’d stage a fightback but we allowed the game to drift away. We really needed that goal early in the second half but it didn’t come.”

The conditions were tough with a very strong wind going against the away side in the first half but Ian stills feels the team should have done better.

“We won’t make excuses but it was like a hurricane in the first half. In a game like that, it’s not about playing football. It’s about your ability to do the simple stuff and that’s no disrespect to Arbroath, they’ve got some very talented players but they were much better than us in the conditions.”

Zak Rudden dropped out of the team late on and the manager gave us an update on the striker’s condition.

“Zak hurt his thigh in the warm-up and we had to take him out of the team which was a blow. He really impressed against Celtic and had a big part to play today so to lose him so close to kick-off was really disappointing.”

Thistle other attacking signing of the window, Brian Graham, did get his first outing as a Jag and his first goal but McCall felt the team didn’t give the forward enough service.

“I was pleased that Brian got his goal but obviously it was just a consolation. He had to feed off half-chances today and he managed to get on the end of a few crosses but none were really clear cut chances. In future, we’ll hopefully give him a bit more to go off.”

McCall finished by paying tribute to the travelling Jags support who made the long trip to Gayfield Park in cold and windy conditions.

“We obviously feel sorry for the fans because we haven’t rewarded them for their backing. It was not a nice day today but plenty of punters made the trip and deserved a better performance than the one they got. For us, we now have to get back to training and make sure the showing is a lot better at home to Ayr next Friday night.”

A more in depth video interview with Ian McCall is available to Jagzone subscribers now – log in to view.