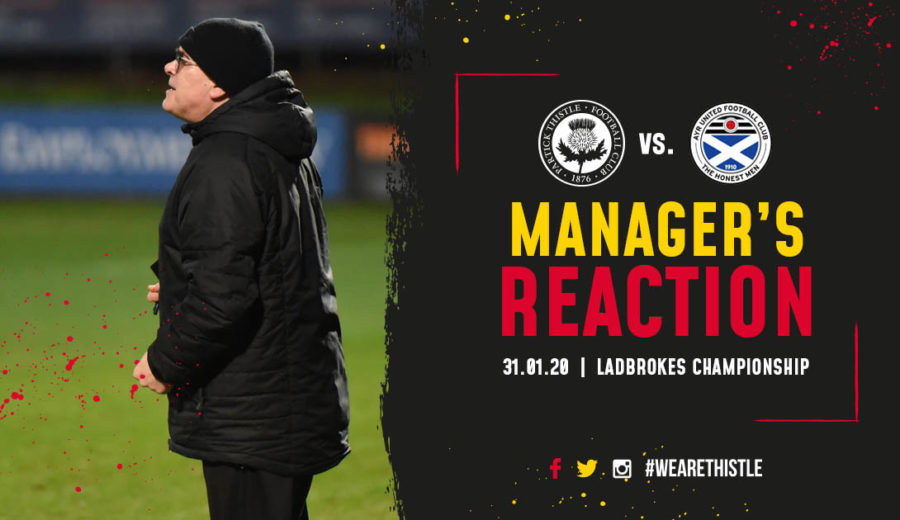 It was an entertaining clash on Friday night as Thistle hosted Ayr United in front of the BBC Scotland cameras. Thistle took the lead through Brian Graham before a hugely disputed penalty brought Ayr level and that key incident is where Ian McCall started when he spoke to ptfc.co.uk shortly after full time.

“I didn’t think it was a penalty. I’m not saying Alan Forrest dived or anything like that, he’s not that type of player, it just wasn’t a penalty. In that respect we are a bit gutted we didn’t get all three points. I thought we dominated the first half, particularly after the first 15 minutes. We got our goal from Brian and went in at half time. The second half was a bit more even but neither goalkeeper had anything really to do.

“We had a really good chance through Joe Cardle in the first half that we should be looking to score and Dario Zanatta has had a good one in the second half. It’s a point, we’re gutted but it’s a point.”

A number of Thistle’s January signings were influential in proceedings as Thistle put in a positive showing against a side sitting comfortably in the promotion playoffs.

“We’ve got to remember Ayr are sitting in the top four for a reason, they have a number of special players who can turn a game but I thought our players stood up to the test and that most of the new boys did well.

“Darren Brownlie came into the starting line up and did well for his first game and I thought Lee O’Connor was good as well. The ones we’re excited about are Zak Rudden and Brian Graham up front. Zak injured his thigh in the warm up last week but we can’t wait to get them on the pitch together, I think you saw in the 20 odd minutes they had together that there could be a really exciting partnership there.”

Brian Graham netted his second Jags goal in his opening two matches for the club and McCall was pleased with the impact the number nine had on the team.

“He’s a handful and he’s a goalscorer. We had a few decent crosses into the bow which he went and competed for, but at times the defending was good as well. He’s done well so far and we’re hoping that continues into the season.”

Finally, we asked the gaffer if there would be any activity in the last few hours of the transfer window.

A more in depth video interview with Ian McCall is available to Jagzone subscribers now as well as reaction from Brian Graham – log in to view.