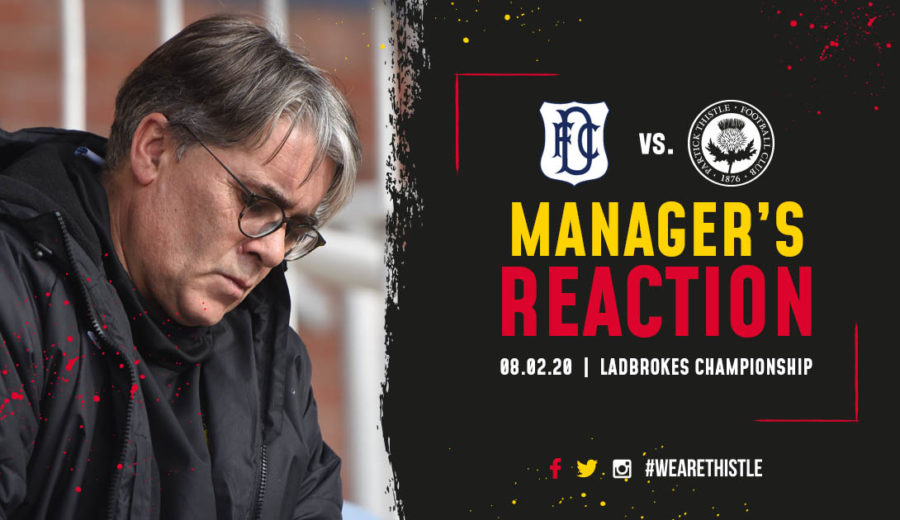 Partick Thistle began their February fixtures with a 2-0 defeat to Dundee this evening in the Ladbrokes Championship. The rearranged fixture, moved due to Thistle’s involvement in the Challenge Cup semi-finals, represented a chance for the Jags to earn their first three points of 2020 but the Maryhill men were undone by a first half double by Kane Hemmings. The striker tapped home from a Jordan Forster knockdown to make it 1-0 and then applied a cool finish when through on goal to add to the Dark Blues’ lead. The visitors started the second half brightly but quickly faded away and the game finished 2-0 to the hosts. Jags boss, Ian McCall spoke to ptfc.co.uk following the end of the game:

“We were woeful. Early in the game they were ready and we looked naïve. We didn’t move the ball quickly enough and when they got their chances they took them so we can’t have any complaints.”

The gaffer was particularly disappointed with the manner of the two goals conceded which saw the Dee take a two-goal lead into the break.

“Both goals were giveaways. The first is another set piece and we aren’t learning from our mistakes as far as those go. The second is an individual error and apart from those they haven’t really threatened our goal so it’s even more frustrating.”

The Jags looked lively coming out of the half-time interval but didn’t keep it up and ultimately failed to really test Conor Hazard which was very disappointing for McCall.

“It doesn’t matter if we had a good spell. A game is 90 minutes and we were awful. We didn’t have pride, we weren’t robust and that’s why they’ve won. We’re in a dog fight and we can’t afford to perform like that.”

He finished by offering a message to the travelling support that made the trip to Dens this weekend.

“There were over 350 Thistle fans in that away end and we let every one of them down. They’re support has been great all season and we gave them a great day last time we were here but this afternoon, the booing at the end was fully justified.”

Further reaction to today’s game from Ian McCall and Shea Gordon will be available to JagZone subscribers this evening – log in to view.