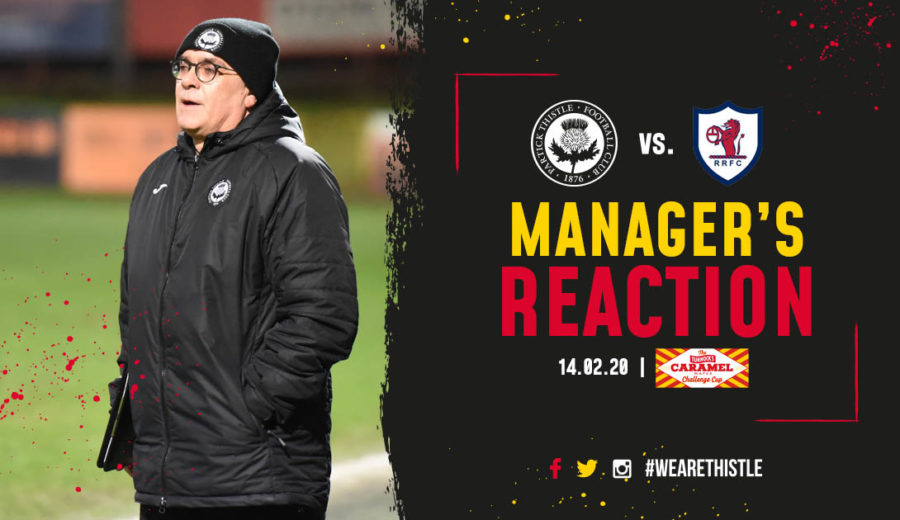 Thistle saw the opportunity of a place in the final of the Tunnock’s Caramel Wafer Challenge Cup pass them by this evening as League One side Raith Rovers took a thoroughly merited place in the showpiece final. The Jags fell two goals behind as Kyle Benedictus headed home from a corner with Regan Hendry adding a second after a number of good chances had been missed by the Fifers. Thistle grabbed a goal back but weren’t able to grab the second to force extra time. Ptfc.co.uk spoke to an under the weather, Ian McCall shortly after full time.

“I thought we played well in the first half and we should have scored with a couple of the opportunities we had. They had a set play and scored from it and I felt it was a bit of a travesty that we were getting beat at half time. We changed in the second half and went a bit gung ho, which left us a lot more exposed at the back. Raith had a couple of opportunities before they got a thoroughly merited second goal. We got a goal from Mansell but it was too little too late.”

For the second game in a row, Thistle conceded from a corner and the Jags gaffer was exasperated about his side not learning from set pieces.

“We’ve worked very hard on them this week as we know it is something that opponents have identified as a weakness in us. We brought everyone back to defend them but you’ve got to do your job and we didn’t do that.”

With the cup campaign over, the focus turns to 12 very big Ladbrokes Championship matches, starting next week with the visit of Dunfermline to the Energy Check Stadium at Firhill.

“We’re devasted because we had the chance to give the supporters the opportunity to go and enjoy a cup final and have a good day that they’d hopefully remember for a while. That’s gone now, we’ve got 12 defining games to go in the Ladbrokes Championship. We’ve got to go and win some games to stay in the league.”

Further reaction to today’s game from Alan Archibald and Lewis Mansell will be available to JagZone subscribers this evening – log in to view.