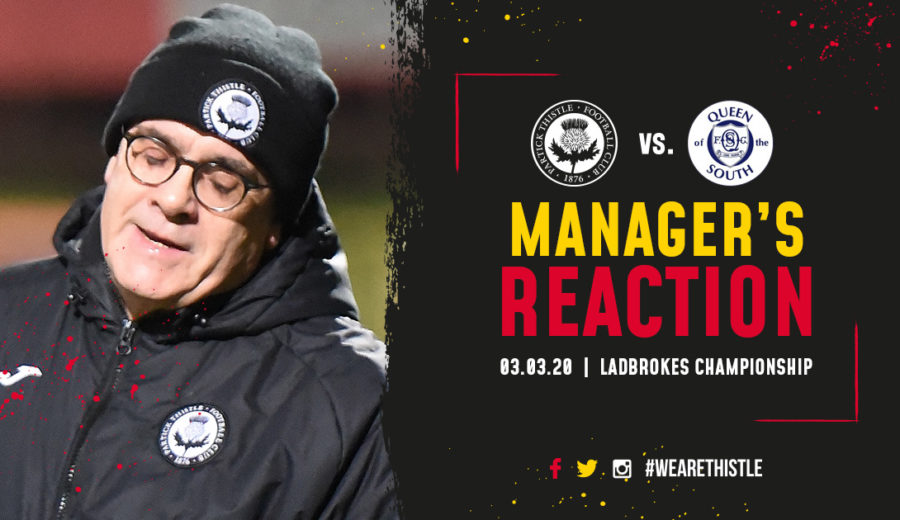 Partick Thistle welcomed Queen of the South to the Energy Check stadium at Firhill in what turned out to be a frustrating match for the Jags. Thistle missed out on the chance to go level on points with Queen of the South as they drew 0-0 in the match that was filled with opportuinities for the home team to take all three points. Ptfc.co.uk spoke to the manager, Ian McCall, who reflected on his team’s performance as a whole after the game.

“First half I thought we were poor although we were the dominant team, second half we were really good with loads of positives but ultimately this is the third of the season where positives don’t matter, it’s all about points.”

The Jags had a host of chances to win the game with the best falling to Brian Graham, Zak Rudden and Dario Zanatta throughout the game. Thistle always looked dangerous on the attack but just couldn’t get the end product in the final third. The home side had some close chances in the first half but were thwarted by the offside flag on two occasions. In the second half the team improved with better and more clear-cut chances for Thistle to take the lead. Ian McCall talked about his sides attacking threat.

“I’m really, really pleased with how they played in the second half they were terrific, It’s the best they’ve played. We were really solid, but that’s the way its going. Shea Gordon has had a great chance, Brian Graham has had a great opportunity too.”

The main talking point of the match surrounded the award of a spot kick after Zanatta was fouled in the box and the referee awarded a penalty to Thistle. This was then overturned as the linesman deemed Zanatta to be offside and gave it the other way. The Jags gaffer was disappointed in the call for the penalty to be taken away.

“I’ve been in the game that long that mistakes happen, and the linesman just made a mistake. I don’t know why he went back on the decision if he wasn’t 100% sure at first, as Dario is clearly onside. I went to speak to him, and he says he thought he was offside and if he has made a mistake, he apologises.

“I think he got it wrong, I’ve just watched it back and it doesn’t matter who it hits, Dario’s not offside, he’s about half a yard onside. The linesman made a mistake, but I’ve made loads of mistakes. We shouldn’t need the penalty; we have had 6 or 7 good chances to put the game to bed in the second half.”

There are still 11 huge games left in the campaign which can change at any moment with a tough challenge up next as the Jags travel to Dundee to take on league leaders Dundee United.

“The nature of this league is such it doesn’t matter whether you’re playing Queen of the South or Alloa or heading up to play Dundee united or Dundee, you can win any game that’s the way it is, just look at the results tonight. We’ll recover well and head to Tannadice on Saturday, confident of getting a result”

Further reaction to today’s game from Neil Scally and Dario Zanatta will be available to JagZone subscribers this evening – log in to view.