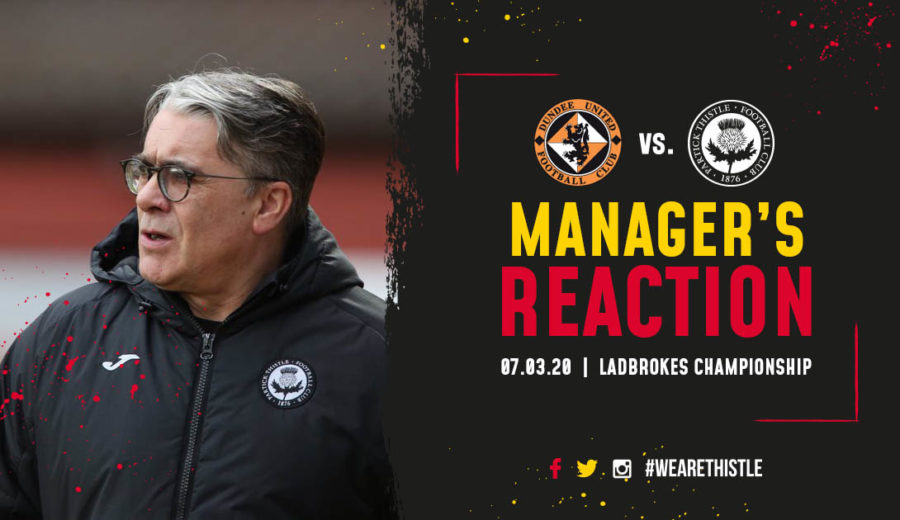 Following on from their midweek draw with Queen of the South, Partick Thistle travelled to Tannadice looking to upset the league leaders this afternoon. They didn’t manage to get all three points but were able to take two from the table-topping Tangerines despite falling behind in the first half. It was Dillon Powers who struck the hosts in front. United’s number four set himself and curled an excellent effort into the top corner and that goal was the difference at the interval but that changed shortly after the restart. Tommy Robson showed some good footwork on the left flank and cut past Paul Watson who then tugged the wing-back’s shoulder, forcing Robson to the ground. Referee, Mike Roncone, pointed to the spot quickly and Stuart Bannigan stepped up and restored parity. In the end, neither team could get a winner and the spoils were shared with Thistle now looking to a midweek game against Dunfermline at home. Jags boss, Ian McCall, spoke to ptfc.co.uk following the final whistle:

“I thought we started well and created a couple of really good opportunities but if you don’t take them then you know a team as good as United is going to come back at you. However, we’re still disappointed with the goal we conceded.

“Reece, who I thought had a great game overall, plays a slack pass and fair play to the boy Powers, he takes full advantage with a great finish but I was happy with how we bounced back and got back into it. At the end of the day, I think we take the point.”

In a very even game, Thistle had some very good opportunities in both halves of the match and Ian felt disappointed that his team didn’t get the win.

“I couldn’t believe we were behind at half-time to be honest. It felt similar to Tuesday night when we were creating chances but couldn’t convert. Thankfully we come out for the second half and Tommy uses some great skill, wins a penalty and Banzo slots it home and gets us level deservedly.

“Then towards the end of the game it could have gone either way and we had a couple of decent chances. Dario Zanatta did really well off the bench and I thought we shaded the second half but we’ll take the draw.”

Dunfermline are next for the Jags at the Energy Check Stadium at Firhill and the gaffer knows his side have to take advantage of their midweek game.

“Over the next couple of days we have to recover properly and get in a good place for Tuesday. It’s such a busy schedule but it’s a real opportunity for us with the two home games next week. Starting with Dunfermline on Tuesday, we need to get better at taking chances we create. We’re getting there but it has to turn into goals and wins.”

He ended with a message for the fans who made the trip up to Dundee to watch the game.

“They were terrific. Singing us on right through the 90 minutes and then after the game. I think they saw fight from the team today to get a draw after falling behind away at the league leaders. We just want to reward them with a win in midweek.”

Further reaction to today’s game from Ian McCall and Stuart Bannigan will be available to JagZone subscribers this evening – log in to view.