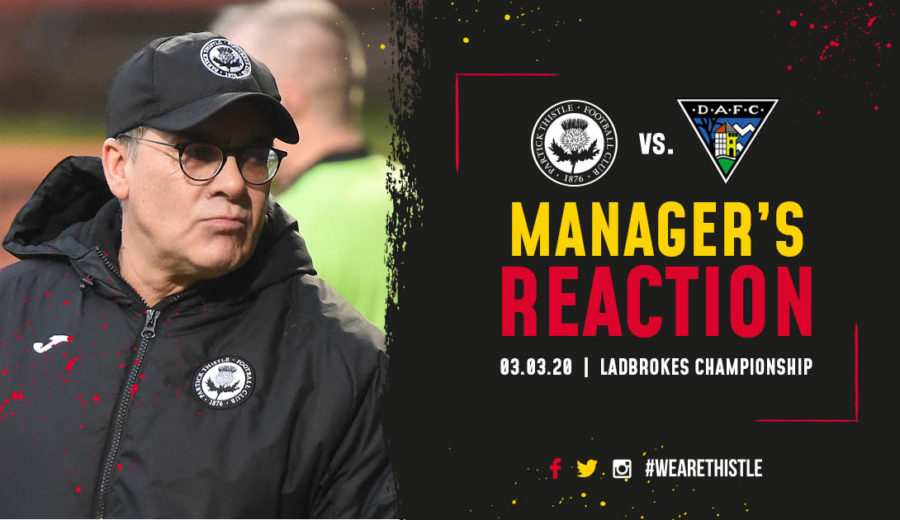 Partick Thistle extended their unbeaten run to three games after a late equalising goal from Brian Graham secured a 1 -1 draw with Dunfermline. The rearranged fixture that was originally arranged for the 22nd of February, but was postponed due to a waterlogged pitch, saw Thistle gain ground of Queen of the South who lost on the night to Inverness. The man of the night produced an outstanding header from Reece Cole’s cross that went gliding past Dunfermline keeper Fon Williams and into the bottom left hand corner of the net. The Jags squandered a handful of chances in the first half which would have been more than deserved, Thistle boss, Ian McCall, spoke to ptfc.co.uk after the game and expressed his thoughts on the first half.

“You tell me what the score should have been at half time because I would have said four. We looked like a proper football team, if we can win on Saturday I have no fears we can play anybody.

“We created a number of good chances, hit the bar and missed a penalty, but that happens. The players showed real character to keep fighting and they never said die. The referee only played four minutes at the end, they were time wasting from the first half, which I have absolutely no qualms with. It could have been easily 8 or 9 minutes added and we might have had time to get a winner.”

The Gaffer spoke about the change in formation to a 3-5-2 and how the squad are handling the change.

“Unfortunately it’s just draws just now, we should have certainly won 2 out of the 3 games. The team have handled it well and Zak Rudden is gonna be a good player for us, he just needs that little bit of luck to get a goal. His chance which hit the bar was one he created by himself out of nothing.”

McCall highlighted how important that point would be and how the team finally have balance to the team.

“It would have been very deflating playing like that and coming off to boos ringing in our ears. The positive news is we gave the fans something to cheer about, the fans will recognise how well we played tonight especially in the first half.

“There is a balance to the team now, we are moving in the right direction and getting there slowly but surely”

Finally the gaffer expresses how that late goal will now give the team momentum until the end of the season.

“I think the momentum is key and scoring that late goal will give them belief, although it is only a point, we deserved far, far more than that. We’ll rest and recover ahead of what is another massive game on Saturday.”

Further reaction to today’s game from Ian McCall and Tommy Robson are now available to JagZone subscribers this evening – log in to view.