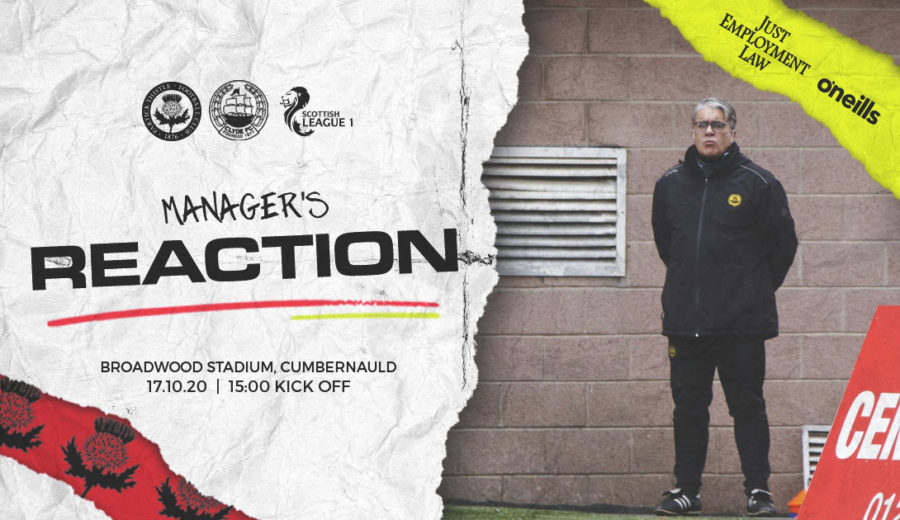 Thistle suffered a 1-0 defeat at the hands of Clyde this afternoon as they got their League One campaign underway at Broadwood. The hosts’ goal came through Ally Love in the second half as the wideman reacted quickly after Jamie Sneddon denied David Goodwillie with Love volleying into the bottom corner to give the Bully Wee the advantage. Ian McCall spoke to ptfc.co.uk after the full-time whistle:

“We weren’t good enough; it’s as simple as that. Clyde were the better team and were full value for the points. We didn’t move the ball well enough or quickly enough and ultimately, we barely tested their ‘keeper which is the most frustrating thing.

“It’s really disappointing that we didn’t translate the way we were attacking during the cup into this game. We looked really dangerous for good spells in the Betfred Cup but that wasn’t on show today. We lacked guile in the final third and, especially after they went one up, we needed to show a bit more to break them down.”

Thistle’s closest effort to scoring came when Ross Docherty glanced a header off the post before Salim Kouider-Aissa picked up an injury as he tried to scramble home the rebound.

“I thought it was in from Doc to be honest and as Salim went to nod it home he has taken a sore one. Salim has a broken nose from that incident in the goalmouth which is a real shame. Obviously, it meant we had to play a good chunk of the game chasing a goal without a recognised striker making things really difficult because we lacked that focal point.

“In the absence of having another striker to bring on we tried to get as much creativity on as possible with the likes of Blair Lyons and Blair Spittal but even then we couldn’t carve them open and you can only credit Clyde for the way they defended their lead once they got it.”

With the Jags pushing forward, Clyde had a number of opportunities to put the game to bed but some fine saves from the Thistle number 1, Jamie Sneddon, kept the side in the game right until the end.

“Jamie’s saves were brilliant and, to be honest, he kept us in it. Towards the end of the game they were creating more because we put Darren Brownlie up front and really going for it meaning Jamie had to make some really good stops which he did brilliantly.”

It’s a return to Firhill for Thistle next weekend as the league campaign moves onto a clash with Airdrieonians.

“We’ll have Brian Graham back for the Airdrieonians game which will be a real boost but we’ll have to assess Salim’s condition to see if he’ll be available for us next week or if he will have miss out. Overall, we have to be more daring in attack and look to really take control of things because we were much too passive on the ball for most of the game today.”

More reaction interviews with Thistle gaffer Ian McCall and midfielder Ross Docherty will be available for JagZone subscribers to watch – log in to view.

We’ll also have extended highlights and a full game replay of the opening league match of the season on JagZone this evening.