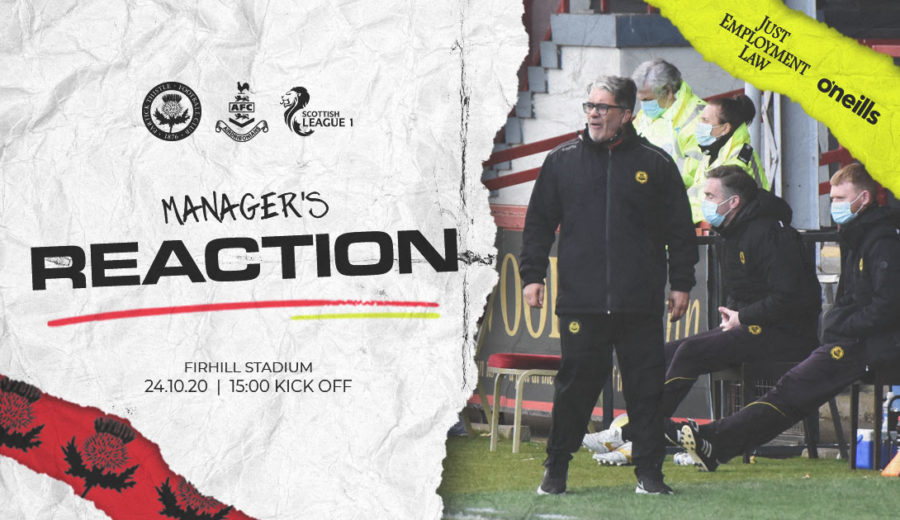 It was back to Firhill league action for Partick Thistle as we welcomed Airdrieonians to Firhill Stadium. Despite falling behind in the first half, Thistle fought back to run out 2-1 winners courtesy of goals from Brian Graham and Blair Spittal. Ptfc.co.uk spoke to Thistle gaffer Ian McCall to get his thoughts on the game.

“It’s a win, that’s the most important thing. I felt we deserved the win the game, although you have to give Airdrie a lot of credit for the last 10-15 minutes of the game. They are really dangerous from set pieces and got a lot of balls into our box and we defended them really well to see the game out.

“We had a good start to the second half and Blair hit a cracking goal that turned out to be the winner. We had two or three really good chances to put the game to bed but we defended really well to get the three points, which was the most important thing.”

Thistle hit back through two well worked goals which saw Brian Graham and Blair Spittal get off the mark in the league goalscoring charts.

“Blair hit a fantastic strike which he scored but he also had a terrific effort which hit the post. I thought Connor Murray made a great impact on the game and he was involved in the two goals today. He made an excellent pass for Shea Gordon, who timed his run terrifically to set up Brian Graham. I was pleased for Shea as he is an important player for us and sometimes people don’t see what he brings to the team.

“The second goal is a great goal from Blair after a great pass from Murray. He hit the post a few minutes earlier with a terrific strike and you are thinking it might not be your day but then he pops up with an even better goal. I think anyone who was watching the game on the stream would have got a great view of that one.”

Thistle had to defend a sustained period of pressure with Airdrie pushing late on to grab the equaliser but the gaffer was pleased with how his side was able to repel the threat.

“I thought defensively we were very good, particularly when Airdrie were getting the ball into our box. Rhys Breen, Darren Brownlie and Brian Graham were all dominant in the air in the last ten minutes to help get us over the line.”

There was a number of enforced changes with Jamie Sneddon and Ciaran McKenna dropping out the squad through injury but the manager was pleased with the performances of Kieran Wright and Rhys Breen who came into the starting line up.

“Unfortunately Jamie and Ciaran picked up injuries which meant we had to change things around but I felt that Kieran and Rhys did well coming into the line up. These are guys who haven’t played a lot of competitive first team football but they did really well. We also didn’t know until 1pm today if Ross Docherty or Brian Graham were going to be able to play but I was really pleased both managed to come through the 90 minutes. All that mattered today was winning, it’s as simple as that and we did it.”

More reaction interviews with Thistle gaffer Ian McCall, Brian Graham and Kieran Wright will be available for JagZone subscribers to watch – log in to view.

We’ll also have extended highlights and a full game replay of our first league victory of the season on JagZone this evening.