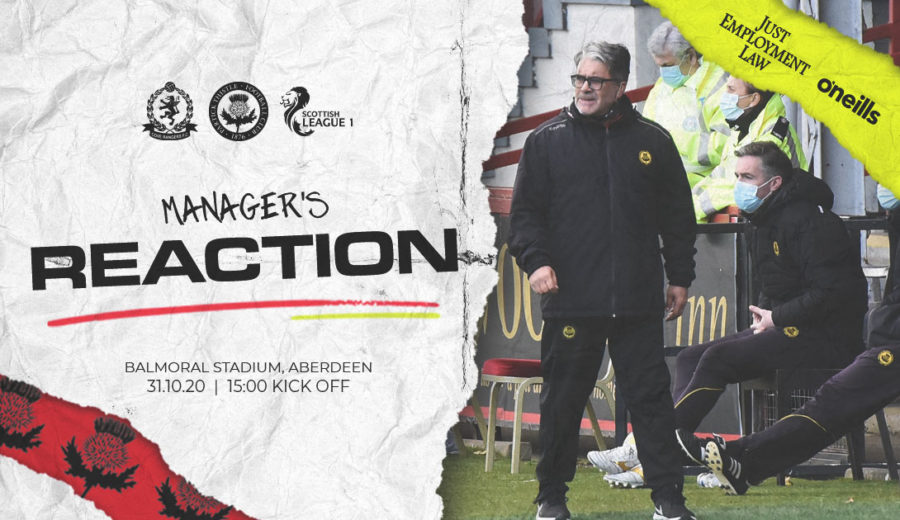 It was late heartbreak for Partick Thistle as an injury-time winner from Rory McAllister saw them fall to defeat at Balmoral Stadium this afternoon. After an uneventful first half Thistle had come close to breaking the deadlock on a couple of occasions; most notably when Blair Spittal had a free-kick tipped over the bar and when Brian Graham’s attempt was cleared off the line by Harry Milne. However, it was the hosts that managed to score with McAllister the matchwinner in the 92nd minute. Jags boss, Ian McCall, spoke to ptfc.co.uk after the full-time whistle:

“It was a horrible game for both teams. We didn’t look in any bother in the second half and dominated after half-time with their ‘keeper making a great save and then we saw one stopped on the line and then they get a goal right at the end of the game because of a mistake.

“It’s a really sore one to take. Whether we deserved to win the game, I’m not sure, but if anyone did deserve to win it was definitely us but we didn’t and we have to move on.”

Cove’s goal came deep in to added time when the game seemed destined for the draw and McCall was disappointed with the nature of the goal.

“We had been in control of things and we just gifted them a winner without them having to earn it or cut us open at all. Ross Docherty has put his hand up for the error but he was excellent apart from that. Overall, we just have to take it on the chin.”

It was a game of few chances and the gaffer says that came down to the weather conditions with the blistering wind having an effect on proceedings.

“I don’t think it was ever going to be a great game of football with the weather, and that didn’t suit either team, but we had a few good openings. Also, we got into some really good crossing positions but our delivery was really poor and we didn’t take advantage of the set piece opportunities we had either.

“Despite that, I think the attitude was excellent and to a man they worked their socks off. If we had managed a 1-0, I don’t think it would have flattered us but ultimately it came down to one single moment where they’ve been able to capitalise on our mistake.”

McCall had been pleased with the way his side limited Cove throughout the 90 minutes which made it even more difficult to see his side concede late on.

“I can’t remember them having a chance before the goal to be honest, not a clear one anyway. If we come off with the draw then you can say well done, the attitude was great because it wasn’t really a game of football but we then gift them a winner. Now, we have to regroup and get a win next weekend and then build a run from there.”

A further reaction interview with Thistle gaffer Ian McCall will be available for JagZone subscribers to watch – log in to view.