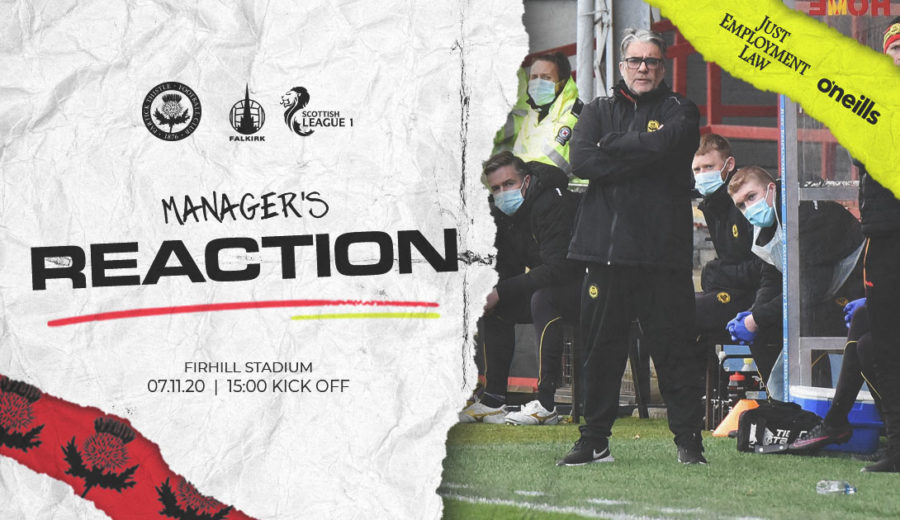 It was late drama once again for Partick Thistle as they conceded a late goal to drop two points against Falkirk at Firhill this afternoon.  The Jags trailed early on as a result of a freak Callumn Morrison goal but battled back to lead thanks to headers from Joe Cardle and Brian Graham, however, a Charlie Telfer strike late in the day meant the points were shared at full-time. Jags boss Ian McCall spoke to ptfc.co.uk after the full-time whistle to give his thoughts on the match:

“It’s frustrating to drop points to a late goal again but I thought the boys did well today and I was proud of the performance. To fall behind so early to a freak goal like that one was tough but we came back into it and were on top for long spells.

“We had a couple of good chances at one-nil with the penalty and one that Ross Docherty had from four yards out but we kept pushing and got our goals deservedly.

“I have to give Joe Cardle a mention, it was a brilliant performance by him today with his goal and assist and that’s the sort of creativity we need every week.”

The opener came as James Penrice lofted the ball over his own goalkeeper and into the Thistle net but McCall felt that there should have been an offside flag before the incident.

“I have just spoken to the linesman to let my feelings be known on it. I was sitting in the stands and it seemed clear to me that he was half a yard or more the wrong side. I’ve now had a chance to see the video and you can see quite clearly that he’s off.

“After that, Morrison picks up the ball and Penrice tries to put a tackle in but it ricochets into the net and that’s a complete fluke.”

The gaffer complimented his team on how they managed to pick themselves up in the second half and get in front.

“After half-time I felt we dominated large parts of it, moving the ball around the pitch well and we were the better team by far. Docherty has that chance from Joe Cardle’s free-kick that he should have buried but then we get our goals and they were two well-worked goals, I thought.”

Ian was, however, disappointed to see his team concede in the closing stages again, dropping points in the process.

“We got a little bit nervy towards the end in the final 10 or 15 minutes as we try to see it out. They started to control a bit more of the ball and got the goal which comes from a deflected cross but it’s a good finish to be fair.

“As I’ve said already, we had big moments in the game and if we take our chances such as the penalty and some of our clear-cut opportunities either side of half-time then we could have been out of sight by the point they equalised.”

Thistle now sit on four points after four league games and McCall is hopeful that his side will be able to pick up more points over their next few games as the Jags aim to start climbing the table.

“I think you wait and look at the league after the first third of games are played and judge how well you’re doing at that point. We still have five games until we get there and we’ve already played Falkirk and Cove who are going to be two of the top teams in this division so now we have to kick on and get closer to the top end of the table.”

The Maryhill men now have a Betfred Cup fixture against Morton to contend with next weekend and Ian says he would rather have another league game to get stuck into.

“I think ideally we’d get to go straight back into the league but we’ve got this game to play in the cup. Brian Graham and Ross Docherty will be suspended so we’re depleted further for it so we’ll wait and see whether we have a chance of qualifying and base the team we pick off that.”

A further reaction interview with Thistle gaffer Ian McCall and Ryan Williamson will be available for JagZone subscribers to watch – log in to view.