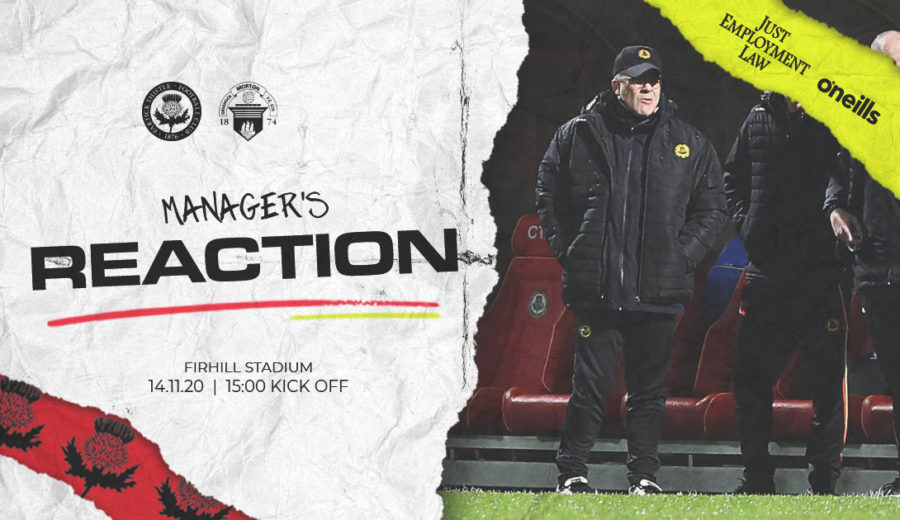 Thistle rounded off their Betfred Cup group with the visit of Greenock Morton to Firhill on a rainy afternoon in Maryhill. After a goalless ninety minutes, the Jags prevailed on penalties to finish 3rd in the group. Thistle manager Ian McCall gave his thoughts to ptfc.co.uk on the clash with the Championship side.

“We’re pleased to get two points from that game considering how many players we have out at the moment. I thought first half we moved the ball around well and looked the better team. In the second half they put us under pressure more but we stood up to it and I’m really proud of them.

“It was always going to be really difficult to create chances without a recognised striker in the team to play off. We had Connor Murray up there to begin with and Blair Lyons later on and they both did what they could but you could tell it wasn’t natural for them. The whole team worked hard until the end and that’s exactly what I asked of them before the game.”

Thistle kept their first clean sheet in a month and the gaffer was pleased with the improvement shown in the defensive areas throughout a tough match.

“It was great to get the clean sheet and I thought the boys at the back deserved it. They dealt with what was thrown at them really well and Kieran Wright was excellent when called upon. They had a couple of near things towards the end of each half but for the most part we kept them out well.”

In a week where Scottish goalkeepers have made the headlines for crucial penalty saves, it was Kieran Wright’s turn as he produced two saves to ensure Thistle won the penalty shoot out.

“Kieran did brilliantly with the penalties. The first one is a pretty simple save down to the right but the second one was fantastic and since he’s come into the team I think he’s been very impressive. Any ‘keeper can make saves but I was pleased with everything else he did today. He showed a lot of composure and communicated well with the rest of the defence.”

Blair Spittal became the latest to join a mounting injury list at Firhill having to leave the field of play in the opening 45 minutes and looking likely for a spell on the sidelines.

“Blair’s injury looks like a hamstring one which is another huge blow for us. It just happened as he went up for a header and it means he’ll miss probably around six weeks. We’re just having no luck whatsoever with injuries at the moment, but we just have to get on with it. We’ve tried not to make the injuries an issue but it’s becoming quite serious. We’ve had a look at how we were training and changed it slightly this week. We’re still working hard but with a lot less contact in training because we just can’t afford to pick up any more injuries.

“We’ll have Brian Graham and Ross Docherty back next week which will be a massive boost and we need it because it’s a very important game against East Fife. We now have a run of fixtures to take us into Christmas and we have to pick up as many points as possible to start climbing the table.”

A further reaction interview with Thistle gaffer Ian McCall and Stuart Bannigan will be available for JagZone subscribers to watch – log in to view.