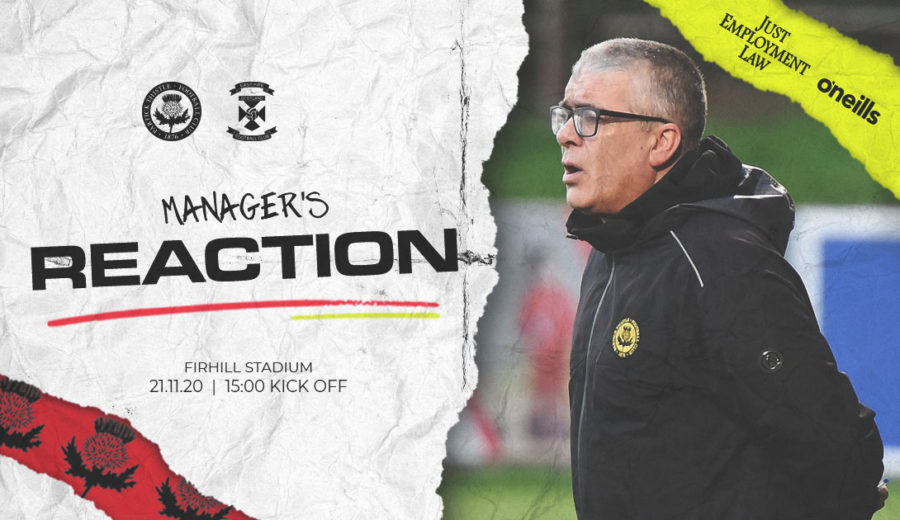 It was a return to winning ways for Partick Thistle as they climbed to fourth in the League One table thanks to a 2-0 win over East Fife this afternoon at Firhill. Brian Graham was the difference maker for the Jags as he converted a first half penalty before adding a second with a resplendent lob with just over ten minutes to play. Thistle’s manager, Ian McCall, spoke to ptfc.co.uk following his side’s second win of the league campaign:

“I thought we should have been out of sight in the first half to be honest. We could have had three goals and if we had stuck our chances away the second half would have been a bit easier for us but we got back on the front foot midway through the second half and it was terrific finish from Brian to make it two and that made things a touch more comfortable late on.”

Mouhamed Niang had to fill in at centre-half as a consequence of Thistle’s injury issues but the gaffer was very pleased with the 21-year-old’s performance.

“I was very pleased for Sena; I thought he did brilliantly. He carried himself very well and didn’t look out of place at all. He needs to learn that he can’t go and win every single ball that comes his way but he was a big part of our clean sheet. As much as I thought Kieran Wright had a good game in the way he went about things, I can’t remember him having a save to make which is to the credit of the defenders.”

With his squad seriously depleted by injuries Ian has been happy with the way the remaining players have performed in recent weeks.

“I think today was a lot closer to where we want to be. It’s a long list of important players we’re missing but looking at our last three games: we’ve won today, won on penalties against a team from the league above and then really should have beaten Falkirk so there are good signs there and we’re only going to get better as the injured guys come back.”

Having played against Morton last weekend without a recognised striker McCall was able to welcome Brian Graham back to the fold today and he was very happy with his frontman.

“Brian was very good getting his two goals. He’s a key part of our team and you’ve seen how much we miss him when he’s not playing. I thought our attacking play was much better overall and him coming back in definitely helped that.”

He was also impressed with a number of his other players who he now hopes can replicate today’s showing every week.

“I thought Ross Docherty and Stuart Bannigan were terrific in the middle of the park. Richard Foster was excellent too and looked very assured at the back. Connor Murray and Joe Cardle were both full energy and caused danger right throughout the game so now for all these guys it’s about getting that consistency week in week out.”

Rhys Breen was the name added to the substantial injury list this week and Ian says the problem is a tough one to get to the bottom of.

“We’ve already changed things the past couple of weeks to try to lessen the intensity and minimise the contact work but even with that we’ve had injuries so we feel like we’ve been quite unlucky on that front but hopefully we’ll have good news on the guys who are out just now in the next few weeks.”

A further reaction interview with Thistle gaffer Ian McCall, Ross Docherty and Brian Graham will be available for JagZone subscribers to watch – log in to view.