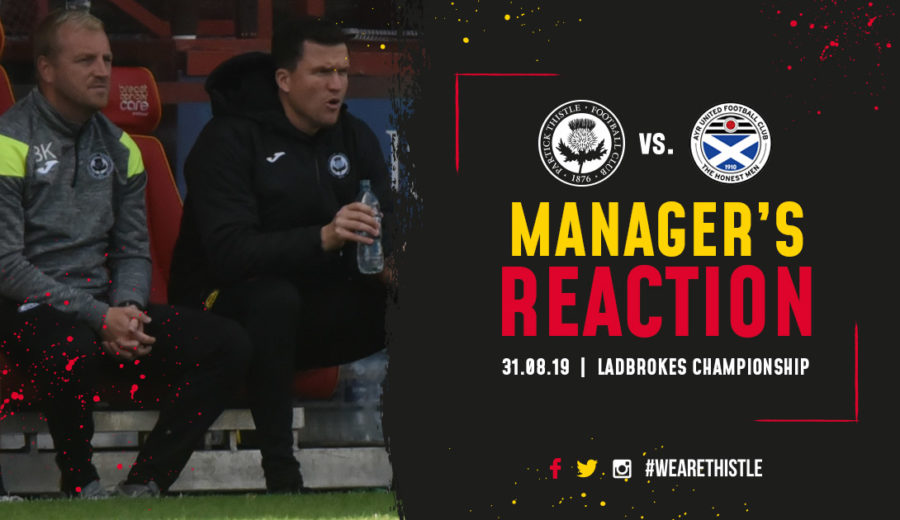 It was an eventful ninety minutes at the Energy Check Stadium at Firhill as the Jags entertained Ayr United in the final fixture of August. Thistle concluded the match with nine men following the dismissals of Shea Gordon and Stuart Bannigan. There was only one place to start when Gary caught up with ptfc.co.uk after the full time whistle as we discussed the two big talking points.

“I don’t think the first sending off is a red card but the second one is absolutely the correct decision.”

Despite the tough circumstances on the pitch, the manager was proud of the effort displayed by his side.

“I’m really proud of the players. I thought they gave absolutely everything in really difficult circumstances. We were very threatening when we were 11 v 11. When we went down to 10, they looked comfortable and disciplined. When we went down to 9 men, we really dug in. I thought the second Ayr good looked marginally offside but I was really proud of the players and I think if it was 11 v 11 we would have won the game. It’s a sore one to take but we have to focus on Montrose next week now.

Debutant Dario Zanatta won the sponsors man of the match after a scintillating debut for the Jags.

“I thought Dario was outstanding this afternoon. He’s a player we haven’t had in terms of his directness and dribbling with the ball. He won the penalty with a really good run in behind the defence and I think for the second goal he beats four players before laying it on a plate for Shea. We’ve only had a couple of training sessions with him and his fitness isn’t where we want it to be just yet so we’ll work with him and hopefully he’ll only get better and better.”

With the transfer window closing on Monday evening, Gary is looking to add one more player to his squad.

“The additions of Ben and Dario have helped, I think everyone could see that this afternoon. We’re still working hard to get another player in the door on Monday. We’ve got a couple of options that we are looking at and we’ll be working right up to the deadline to make sure we can get it over the line.”

The focus turns to the Tunnocks Caramel Wafer Challenge Cup with a trip to Montrose next Saturday afternoon and the gaffer is looking forward to the trip to Angus.

“I think you saw a lot of positive signs of a team coming together this afternoon. It was taken out of our hands by a game-changing decision this afternoon. We have to fight and work hard ahead of what is going to be a difficult and tricky trip to Montrose next weekend.”

A more in depth video interview with Gary Caldwell is available to Jagzone subscribers now and reaction from Sean McGinty and Cammy Palmer will be online shortly – log in to view.