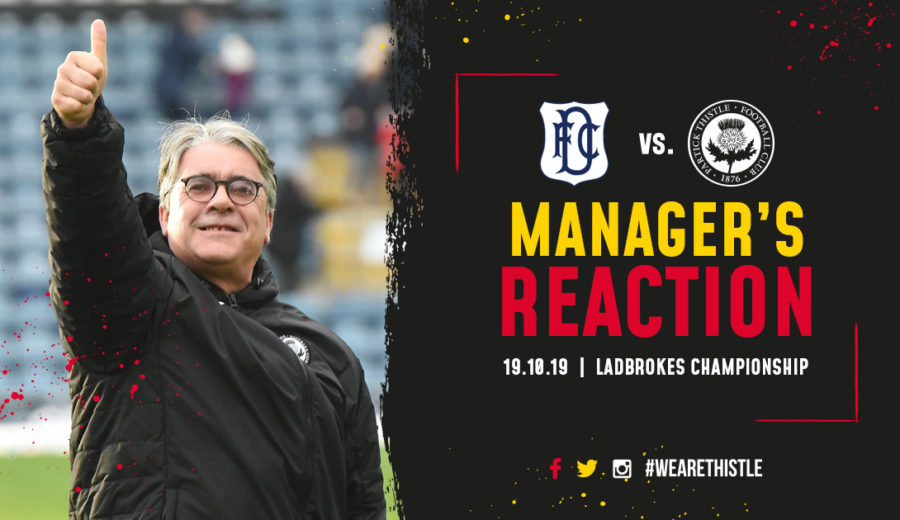 Thistle emerged from this afternoon’s match at Dens Park with all three points after a trio of late goals overcame a deficit to win the match. Kenny Miller notched for the Jags before Shea Gordon and Lewis Mansell both netted in the 90th minute to put the seal on the three points. Jags gaffer Ian McCall spoke to ptfc.co.uk shortly after the game.

“I thought for 30 minutes we were outplayed, We couldn’t get a hold of McGowan or Dorrans at all. We had a good spell towards the end of the first half and missed a terrific chance.

“We changed it at the break, the subs were tactical. In the second half we were on top for the first 25 minutes and didn’t get the goal and you get the feeling with the game so stretched that Dundee could get another one. Then we scored three great goals. On the second half performance we thoroughly deserved our win.”

Kenny Miller got the scoring underway with a composed finish after being picked out by Ryan Williamson.

“It’s a great finish, That is Kenny on 8 goals which is remarkable. It was also a brilliant finish from Shea and I’m delighted for young Lewis Mansell to get his first of the season. It shows the league is going to be incredibly tight this season.”

The impact of the Jags half time subs brought an increased intensity and energy to the side and Ian was delighted with the impact from the bench.

“It is always nice to get the impact from the subs, sometimes it happens and sometimes it doesn’t and thankfully it worked today. It was great to see our fans happy like that at the end. They travelled up here in brilliant numbers and we’ve sent them home happy. That is 4 games and we’ve won three of them which is great.”

Gary Harkins made his first appearance of the season after a spell on the sidelines with injury and the manager was pleased to see him back on the pitch.

” He thinks he should have scored with his header and he is always capable of doing something. I’ve known him for a long time, but today was just a great day and win for our club.”

A more in depth video interview with Ian McCall is available to Jagzone subscribers now as well as Thistle players, Shea Gordon and Ryan Williamson – log in to view.