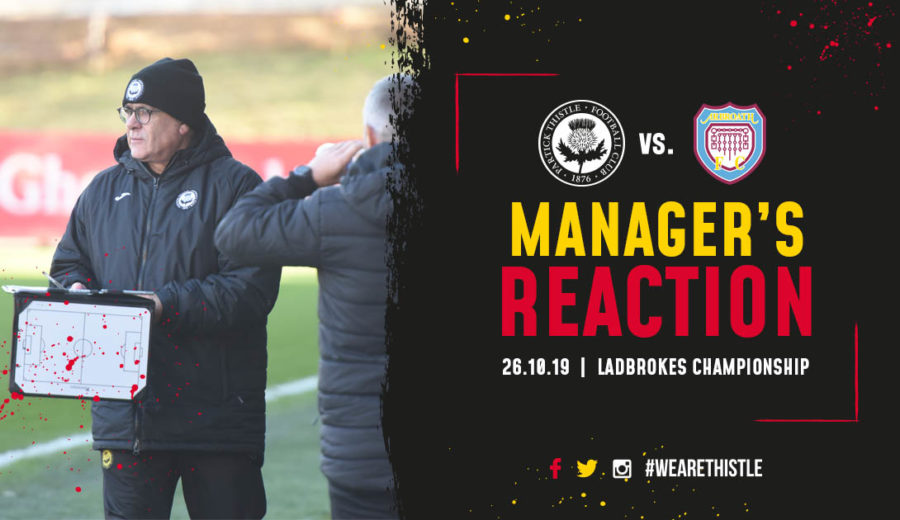 It was a very frustrating afternoon in Maryhill as Arbroath headed north with three Ladbrokes Championship points after running out 3-1 winners against Partick Thistle. Thistle had looked poised to push on and claim all three points when Stuart Bannigan equalised from the penalty spot after an hour, but the Red Litchies struck twice more to ensure the points returned to Gayfield. Jags gaffer Ian McCall spoke to ptfc.co.uk after the match.

“I felt we were very comfortable in the first half without carrying any real threat. I think Tommy Robson had a couple of good opportunities but I didn’t feel that we threatened their goal enough. Arbroath broke up and got their goal which made it harder.

“We spoke to them at half time and the team came out for the second half and for 15 minutes we were great. We got our goal and the stadium was positive. There was another one that fell behind Kenny which was unfortunate. But we were the architects of our own downfall and we sucked the atmosphere right out of the crowd with poor play. I think as a team we dropped standards and we didn’t build on our equaliser.”

The gaffer was disappointed with the display of the team throughout the ninety minutes and admits that standards need to improve again quickly.

“I thought we were quite poor and we had a number of players off the boil. It doesn’t matter what team you are, if you have a lot of players off form then you are going to struggle to win games. I’d give passmarks to Miller and Penrice. The really disappointing things is that the first 15 minutes gave us all serious hope that we were going to go on and win the game and we didn’t do that. We were sloppy with possession and playing balls that weren’t on and that just took the atmosphere out of Firhill.”

Thistle’s home form has been particularly concerning so far this campaign and Ian knows that it has to improve if the club has any aspirations of climbing the table.

“We’ve won three games out of five and done brilliantly on the road but unfortunately the two games we have lost have been at Firhill and that can’t continue. It was great for the 500 fans at Dens last week, but the vast majority of our fans are here and want to see it here and we haven’t given them it. We’ve got to rectify it to climb the league. If we can do to Dens Park and win, head to Inverness and win then we can definitely go to Tannadice and get a result.

A glimpse of positivity arrived in the form of Dario Zanatta returning from injury and the Jags manager was pleased to see him get back on the pitch.

“He was involved in the goal, and the chance just before it. It’s good to get him back on the pitch. He’s got work to do to get even better but it’s good that he was able to get back involved this afternoon.”

A more in depth video interview with Ian McCall is available to Jagzone subscribers now as well as reaction from Craig Slater– log in to view.