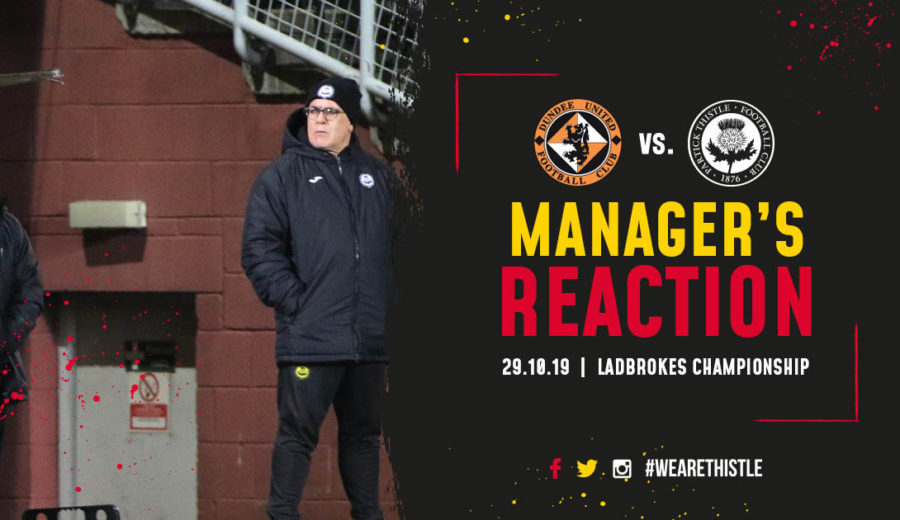 Partick Thistle ended October with a trip to Tannadice to take on Dundee United as the division’s bottom and top sides faced off. The Jags were looking to bounce back from a disappointing performance against Arbroath with a win against United but, unfortunately, it wasn’t to be as Lawrence Shankland’s second half header proved the difference between the two teams. The Jags enjoyed plenty of possession and dominated stretches of the match but failed to turn that into goals as Robbie Neilson’s team ran out narrow winners. Thistle boss, Ian McCall, spoke to ptfc.co.uk after full-time as he reflected on a tightly contested 90 minutes.

“I think if any team deserved to win, it was Partick Thistle. We were on top for large parts of the game, especially in that second half. We had two or three good efforts in the first half and then in the second we had a couple more with Steven Saunders and Shea Gordon both getting on the end of corners where they could have done better.

“I can’t really remember too many shots that United had. Shankland hit the bar not long before the goal but that was from way out. However, he goes on and scores because that’s what he does and it’s why he’s getting paid a lot of money and why he, in my opinion, could play for any team in Scotland.”

Following on from a poor showing against Arbroath at the weekend, Ian was delighted to see plenty of signs of improvement in his side against the title favourites.

“I thought there was great effort from the team. I told them that they needed to show a bit of pride and passion tonight because for the last half an hour on Saturday, we let the fans down and I felt that they responded with plenty of pride and passion and at the end of the game I certainly didn’t think we deserved to lose.”

McCall’s side now prepare for a trip to Somerset park to face Ayr on Saturday and he knows that if Thistle have aspirations to finish in the promotion play-offs, they have to start recording win consistently soon.

“It’s still very early days in terms of the league season. You can see the top four are a wee bit ahead at the moment but it’s not insurmountable if we can go and get two or three wins and a couple of draws in the next five or six matches. We want to be in the middle of the league by January and then we can make some changes but they won’t be wholesale because I believe this team is better than it has showed in certain games and you could see that tonight.”

The Jags had previously won away at Inverness and Dundee and the manager was gutted that they couldn’t keep that run of wins on the road going this evening against the table-topping Tangerines.

“Those were terrific results and I genuinely feel like we deserved to win the game more than United tonight. I hope that the 250 or so fans that travelled to the game saw that extra fight and passion and were proud of the team tonight. Hopefully, they see the potential that this squad has.”