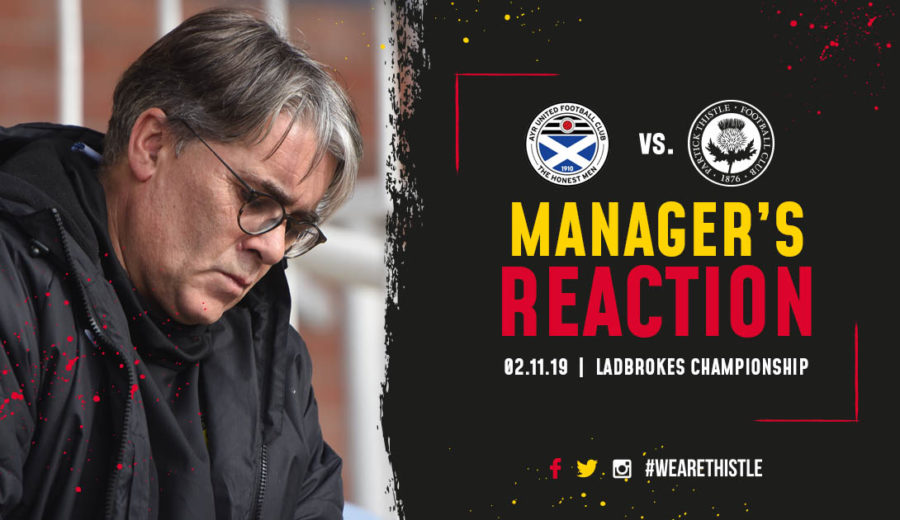 Partick Thistle started their November fixtures with a trip to Somerset Park looking to get back to winning ways but in the end it was an afternoon to forget for the Jags. Two goals either side of half time saw Ayr fly into a convincing lead with Joe Cardle’s 79th minute goal the only consolation for the Maryhill men who remain bottom of the Championship after the defeat. Thistle boss, Ian McCall, spoke to ptfc.co.uk following the final whistle, beginning by giving his summary of the match:

“Ayr United were very good and we were very poor. We got much better in the second half, towards the end of the game, but that’s only because they took their foot off the gas; simple as that. It was nowhere near good enough from our perspective.”

The former Ayr gaffer quickly acknowledged that the performance was far from good enough and said that the blame falls at the feet of everyone involved.

“It’s not acceptable at the end of the day and I know these guys can do better. They’ve shown in other games this season that they have the ability to go and win matches but you can’t expect to get any points in this league playing like that.”

He was particularly disappointed to see a significant step backwards made by his players after an encouraging game at Tannadice on Tuesday night.

“We looked like a different team to the one that played in midweek against Dundee United and that’s something we have to address because although people might say the top four is still there, we are in a relegation fight as things stand and although there will be other teams dragged into the fight we need to start winning if we want to get away from it.

“We’ve been far too inconsistent since I’ve been here. Going to places like Inverness and Dundee and getting wins and then coming here and losing 4-1; we can’t continue like that and we have another chance to get another win next Saturday against Morton.”

Ian finished by complimenting the traveling Jags support who turned out in good numbers but were delivered a showing that didn’t match their backing.

“I can only apologise to the fans. Plenty of them made the trip again but we didn’t give them anything to cheer. Now we have to get back on the training pitch, make the improvements we need to make and then come out next Saturday and get a result for them.”

A more in depth video interview with Ian McCall is available to Jagzone subscribers now as well as reaction from Kenny Miller – log in to view.