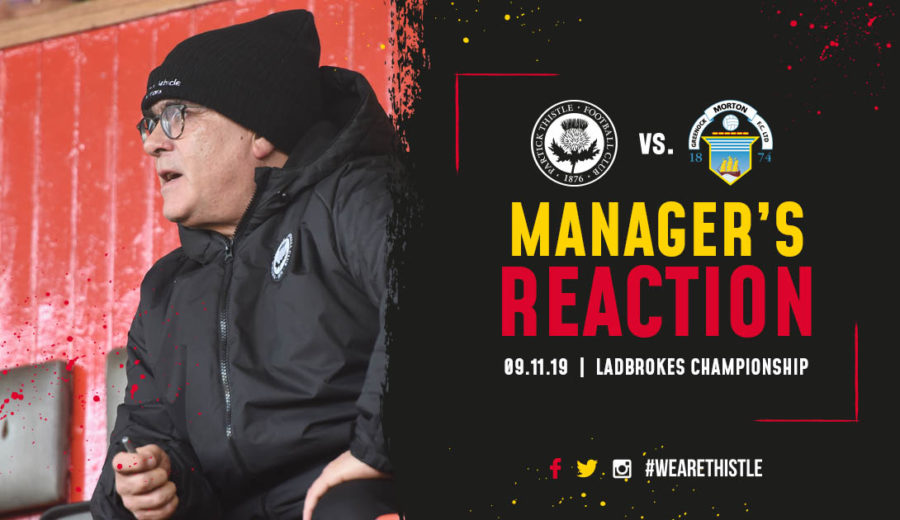 Thistle battled hard, dug deep and ground out a valuable three points this afternoon at the Energy Check Stadium at Firhill as the Jags defeated Morton by two goals to one on a cold afternoon in Maryhill. Ian McCall’s ten men side showed tremendous spirit to ensure the points stayed firmly at Firhill and it was a thrilled Jags gaffer who spoke to ptfc.co.uk shortly after the full time whistle.

“There has been a lot of lows since I came back but we’ve had 8 games and won 4 and lost 4. If you offered me a 50% win rate for the rest of my career I’d definitely take it. We made it hard for ourselves today, we should have been a couple of goals up in the first half, with a few gilt edged chances in front of goal. We hit the bar from a corner kick, go in at the break level and then we go down to ten men.

Thistle came out on the front foot at the start of the game but showed heart and desire in the latter stages when up against an extra man.

“I can’t fault what the players did today. We played well at spells in the first half but when it mattered we dug in and I don’t remember Morton cutting us open in the final stages of the match. We kept our lines well and worked very hard to make sure there weren’t any opportunities. Scott Fox was very safe today but I don’t remember him having an outstanding save to make because our defence was that good.

“Tam O’Ware had his best game for us and he was a real leader at the back for us today. Ben hasn’t had a lot of action in recent weeks and he did very well too and Sean was commanding in the air for us today, as a defence and goalkeeping unit they gave us the platform to go and counter. It was a backs to the wall at the end. When scored to make it 1-1 weaker teams would have crumbled but we showed grit, passion and hunger to not only dig in at 1-1 but to head up the pitch and net a second goal to win the game.”

Finally the Jags gaffer rounded off with a word for the thistle support.

“The fans were fantastic today. We started on the front foot and I think that gave them something to get behind early on. When we went down to ten men they really stepped up their support and gave everyone that little bit extra to go and make sure we could see it through. It was fantastic that we scored the two goals into the John Lambie Stand this afternoon and hopefully every Thistle fan can enjoy the rest of their weekend. We’re off to Stenhousemuir next for a chance to get to a cup semi final so it’ll be great to see them there next week.”

A more in depth video interview with Ian McCall is available to Jagzone subscribers now as well as reaction from Reece Cole and Shea Gordon – log in to view.