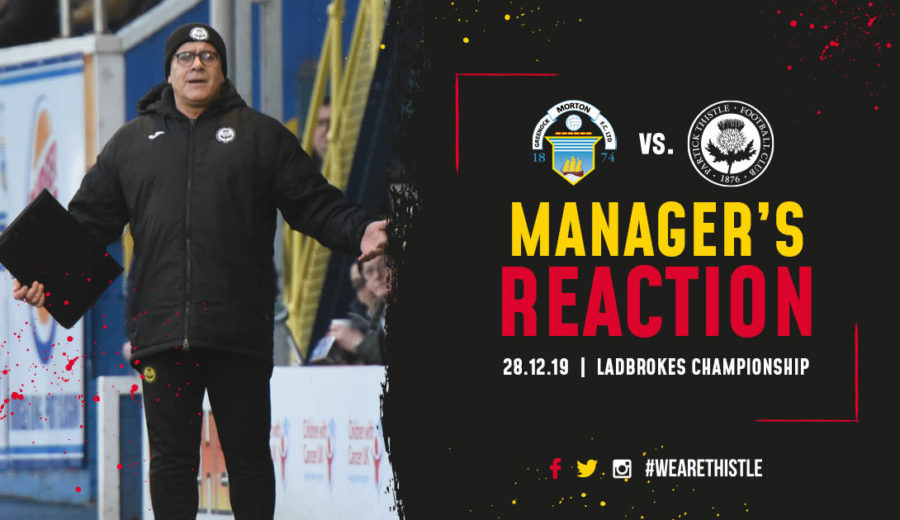 It’s been a roller-coaster of a decade for Partick Thistle Football Club but the Jags ended the 2010s with a fantastic 2-1 victory away to Greenock Morton this afternoon. Alex Jones opened the scoring for the Maryhill men after just five minutes, however, a contentious penalty was awarded the way of the hosts and Kyle Jacobs levelled things on the half-hour mark. Then up steps Thistle skipper, Tam O’Ware, to score the winner on his return to Cappielow with a nice finish at the front post from a Reece Cole corner. The win sees the Jags leapfrog Morton into eighth place ahead of the New Year, moving back out of the relegation play-off spot in the final game before the January transfer window opens. Gaffer, Ian McCall, spoke to ptfc.co.uk after the match:

“I thought it was a brilliant result and one that we thoroughly deserved. We were well on top in the opening stages and rightly got the goal from Jonesy but then they got that penalty and suddenly it’s 1-1.

“In the second half, again we looked the better side and Tam does brilliantly to get on the end of that cross. He had one just before that the ‘keeper saved well but he wasn’t going to miss twice. It should have been more comfortable than it was but it a great win considering their home record.”

Once again McCall’s side dug deep to hold on for three points and the manager was very complimentary of the boys’ grit and determination in the closing stages.

“It was tough out there towards the end. They sent a lot of long balls our way but we stood up well to it; winning headers and tackles all over the pitch and they didn’t create much from open play at all over the piece.”

The Jags now move up into eighth place, overtaking Morton and moving a bit closer to the pack above, and McCall’s is feeling proud of his team’s form.

“Look, that’s nine games now with only two defeats but we can’t get ahead of ourselves. We’re still very close to those bottom two teams and we’ve now got a big game against Alloa on the 4th so we’ll now look forward to that game and see where we are after that.”

Finally, Ian McCall paid tribute to Colin Weir who passed away the day before the game.

“I mentioned Colin in the team talk and that game was for him and all he’s done for our football club in a number of facets over a number of years. It’s a great three points and we’re delighted to be able to dedicate them to him.”

A more in depth video interview with Ian McCall is available to Jagzone subscribers now as well as reaction from Stuart Bannigan and Osman Kakay – log in to view.