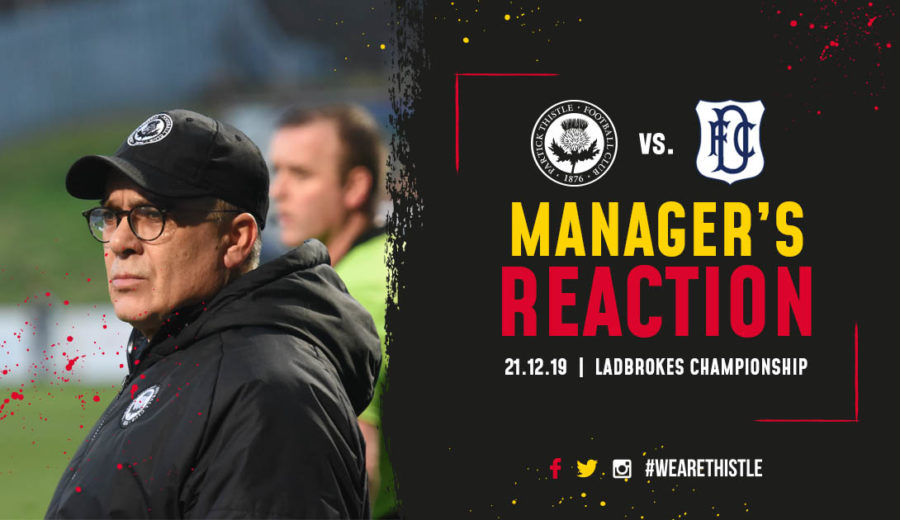 Thistle fell to defeat this afternoon against Dundee with Paul McGowan’s first half strike separating the sides. After the match, Jags gaffer Ian McCall, spoke to ptfc.co.uk.

“I don’t think we did enough to win but we certainly didn’t deserve to lose. It’s the nature of this league that you can play well but not necessarily get the result. They got their goal in the first half after we had a couple of great chances. Kenny has hit the bar, on another day that bounces in, we’ve had a couple of headers from corners that flashed across goal as well.

“In the second half we huffed and puffed and their goalie made a one great save. They sat in and tried to hit us on the counter attack. I was pleased with the effort and how we went about things. We certainly didn’t do enough to win but we didn’t deserve to sit here with nothing.”

Thistle failed to score in a match for the first time in a couple of months as the Jags failed to break down a stubborn Dundee defence.

“In the second half we didn’t threaten enough. We didn’t have the guile to open them up when they camped deep and sat behind the ball. Their goalie made one great save but apart from that we didn’t really test them. It doesn’t matter how you play, it’s about results. It shows how far we’ve come that we went into today’s game with everyone expecting to win. If we had got that win we’d have been a handful of points outside the top four which would have been incredible. We just need to kick on from here.

“I just didn’t think we had enough players in goalscoring positions but we finished the game strong which has been a recent trend because we are very, very fit now but we just couldn’t get that equaliser.”

Scott Fox put in a man of the match performance making a number of impressive saves to keep Thistle in the game as Dundee looked to put the contest to bed.

“Scott had a terrific game. He dealt well with everything and had a couple of brilliant saves in the second half that kept the game to 1-0. You’ve always got a chance when a goal behind, all it takes is the ball to drop in the penalty area and you’re level but we couldn’t find that killer touch in front of goal this afternoon.”

Finally, the gaffer concluded with a message to the Jags support.

“I’m really, really disappointed for the supporters today. They got right behind the team for the whole day and we were desperate to win to get their Christmas holidays off to a great start. I’d like to take this opportunity to wish every Partick Thistle supporter and their families a very Merry Christmas.”

A more in depth video interview with Ian McCall is available to Jagzone subscribers now as well as reaction from Tam O’Ware – log in to view.