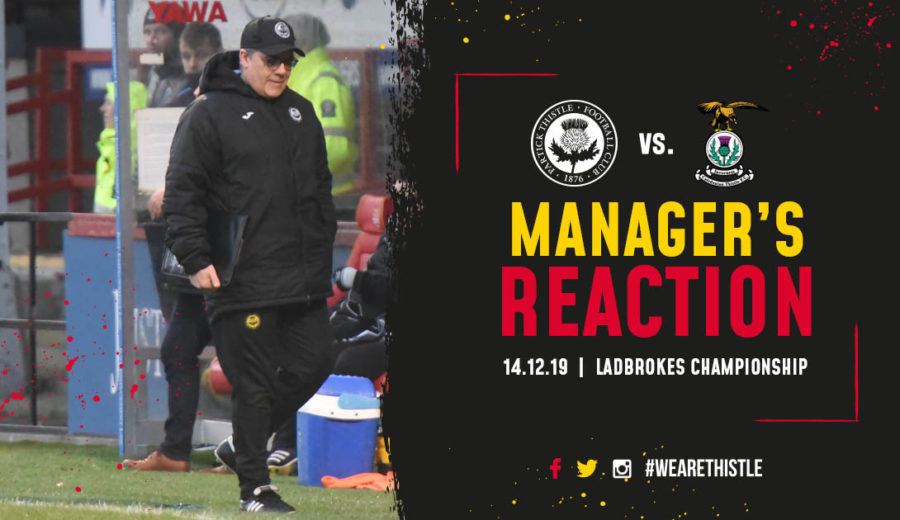 Thistle made it back to back wins with victory against Inverness Caledonian Thistle at a rain-soaked Energy Check Stadium at Firhill. Second half goals from Alex Jones, Steven Saunders and Dario Zanatta gave the Jags three more points against the Caley Jags. It was a pleased Ian McCall who spoke to ptfc.co.uk following the match.

“There was a lot of good performances for us today. Dario Zanatta is going to be a very big player for Partick Thistle. He came on as a sub and he stretched the game for us and he was really effective. Bannigan showed why I think so highly of him with a man of the match performance in the middle of the park. We were great from front to back and deserved the win.”

The win continued Thistle’s strong run of recent form and the gaffer was pleased to add three points to the tally.

“It’s seven games now, five wins a draw and a defeat. With the defeat I’ve told the players to ignore because we had a man sent off after three minutes. It’s not a wee run anymore, it’s a substantial run and we look forward to having Dundee at Firhill next week.

“You’ve got to keep the run going. January is just around the corner and we’ll be looking to strengthen but I thought we were terrific today. Inverness are a good side and, for me, they have the best manager in the division so it was nice to get the win. We beat them up there as well. It was a terrific game on a horrible day and any supporter who came out to watch it was very well entertained. On another day it could have finished 5-3 to us. I’m very pleased with the performance.”

There were a lot of battling Jags in red and yellow this afternoon, with bodies flying for the cause as Thistle repelled a bit of Inverness pressure.

“In this league, you’ve got to fight for everything whether you are at the top or down the bottom. Everyone is this division is very evenly matched. They put a lot of balls into the box but we stood up to it well in the defensive areas. There was a lot of good quality play by us and we could have had more goals.”

Alex Jones got his first Jags goal having returned to the side last weekend and McCall was pleased to see the hard working striker find the back of the net.

“It was a great finish from Alex. I didn’t know it was his first goal for Thistle but he worked his socks off. He’s been out for a wee while and it has obviously been frustrating for him to recover but we’ve got him back now and he offers something different in our attacking areas. He allows Kenny to play a bit freer which is great for the team, it contributed to a good win for the team which has sent all the guys and girls in red and yellow up the road to enjoy their weekend.”

A more in depth video interview with Ian McCall is available to Jagzone subscribers now as well as reaction from Alex Jones and Dario Zanatta – log in to view.