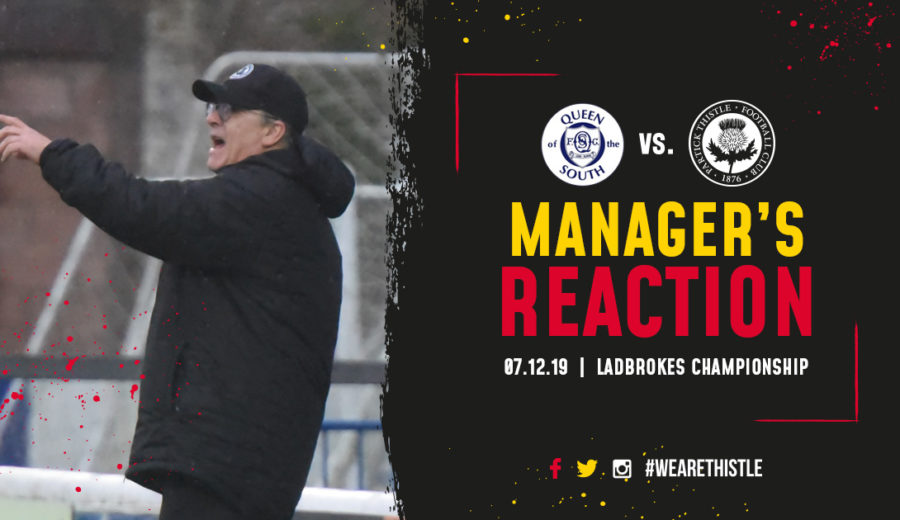 Partick Thistle started their December games with a trip to Queen of the South looking to put their 5-1 loss to Dunfermline behind them at Palmerston Park and that’s exactly what the Maryhill men did. Second half goals from Joe Cardle and Reece Cole flipped the game on its head after the Doonhamers had taken the lead through Conor Murray early on. The winning goal came six minutes from time as Cole fired a long-range effort past Robby McCrorie off the underside of the bar after the Queens ‘keeper had got a touch on it. The win takes the Jags off the bottom of the Championship and to within four points of the day’s opposition. Thistle gaffer, Ian McCall, spoke to ptfc.co.uk after the final whistle:

“It wasn’t a great game of football but I’m proud of what the boys showed in that second half. We felt like we started the game pretty well but after 15 minutes or so Queens took over and it was like that until half-time.

“We got there in the end though and at this point of the season, it doesn’t matter how you do it, you just need to win and we did that though we understand that there was still a lot to work on there.”

On top of the win, Thistle now move above Alloa into ninth place and McCall admitted he was pleased to see his side move off the foot of the table.

“I actually didn’t know the other results until someone told me in the press area. The points were the most important thing because we needed a result to lift us but to see that we’re off the bottom of the table as well is brilliant. It closes the gap to a few of the teams above us as well, including Queens, so it’s up to us to build on it in the coming weeks.”

Ian had individual praise for Reece Cole who produced the all-important goal in the 84th minute.

“I didn’t think he had one of his best games today but now he’s got four goals in five games and he hit the bar in the game he didn’t score so he’s become a real goal threat for us which is great and when the game isn’t as frenzied he can really pass the ball so we’re hoping we’ll be able to hang on to him for the rest of the season.”

Finally, the manager complimented the fans who he was very appreciative of for their support throughout the game.

“The fans were excellent. After last week, I wouldn’t have blamed them for staying at home but more than 300 turned out and even when we were one down, they were singing and encouraging us to go and get back into it which was great to hear.”

A more in depth video interview with Ian McCall is available to Jagzone subscribers now as well as reaction from Alex Jones and James Penrice – log in to view.