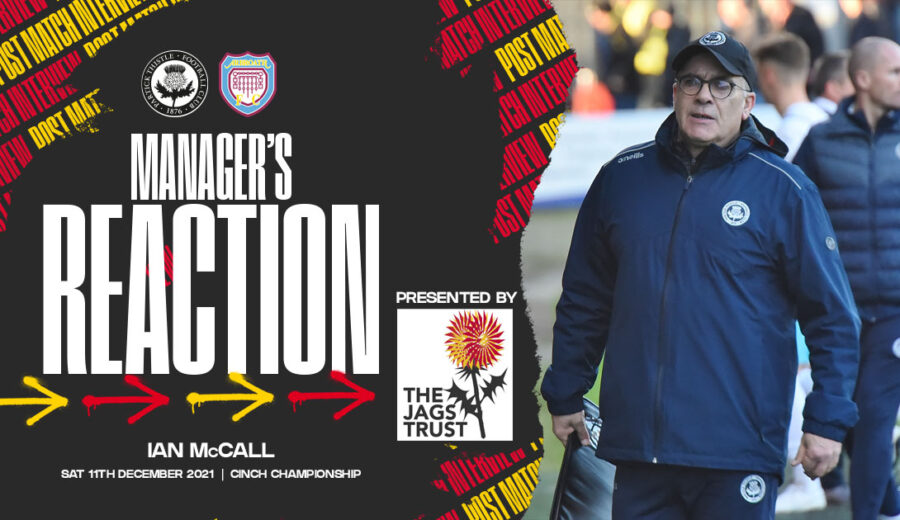 The nine-game unbeaten run came to an end this afternoon for Partick Thistle as they were beaten 2-0 by Arbroath at Firhill. Goals from Anton Dowds on the stroke of half-time and Liam Henderson in 78th minute secured the points for the Red Lichties as they leapfrogged the Jags, leaving Thistle in fifth place. The hosts’ best chance of the game came with the score at 1-0 as Brian Graham set up Ross MacIver but the substitute volley thundered back off the bar and was cleared. Although both of Arbroath’s goals came from set pieces, they might have scored at least a couple more from open play with Scott Stewart, James Craigen and Joel Nouble all passing up good opportunities to add to the Smokies advantage. Jags boss Ian McCall spoke to ptfc.co.uk after the conclusion of the match:

“Arbroath thoroughly deserved to win that today which is very frustrating because I thought we were doing alright for the first half an hour but then Cammy Smith goes off and that seemed to hurt us a lot. Then, we concede that goal on half-time and that’s a real sucker punch too.

“Coming out for the second half we had a few moments early on but we let it fizzle out. They really should have scored a couple of their chances after that but eventually they did get that second goal and reflecting on the 90 minutes, you can’t say they didn’t deserve to win.”

Both of the visitors’ goals came from set plays and the manager was frustrated to see his team lose goals that way.

“We knew coming into the game that they were going to be a threat from set pieces so of course it’s really disappointing that they’ve beaten us with two. We could have defended both of them better but, to be honest, I’m going back into the dressing room to a defence who have kept eight clean sheets in a row and I’m finding it tough to give them too much stick.

“We knew the defensive run was going to come to an end at some point and, realistically, today they could have scored four or five if they were really clinical so we now just have to put this game behind us and look to get back to what we’ve been doing well recently next weekend.”

Although he admits his side were well-beaten in the end, the gaffer does feel that the game could have changed if Ross MacIver had buried his chance to restore parity.

“It was a big moment and if we get back level with 25 minutes to go then you never know what might have happened. In that second half we looked like we needed something to create a spark and the goal could have been that.

“Ross himself is frustrated to have missed it but these things happen in football and we should have been creating more good chances than just that one anyway.”

Now, McCall is hoping to see his team bounce back next week as they take on Raith Rovers in more home league action.

“It’s all about how we react now. We’ve got two more big games coming right up so we can’t let this affect us. We didn’t give a good account of ourselves last time we played Raith so we’ll need to do a lot better than last time and a lot better than we did today if we want to get a result from that one.”