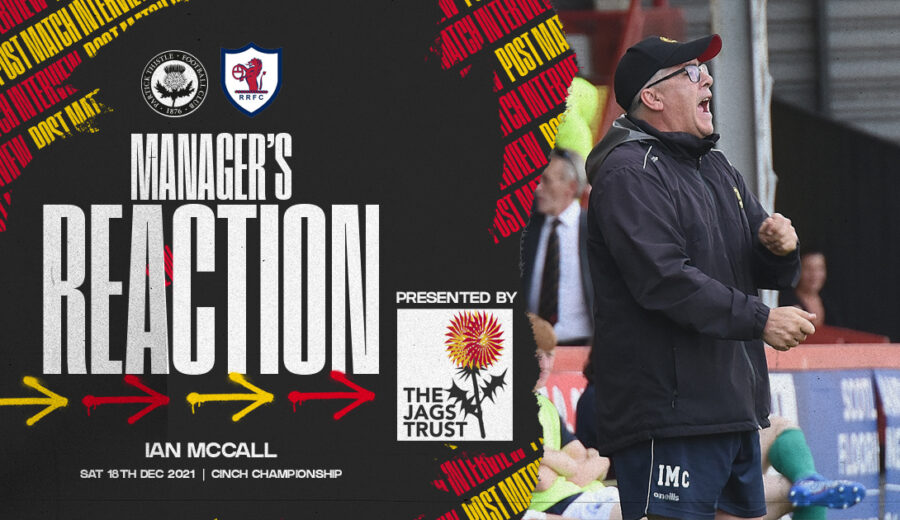 It took Partick Thistle every second of the 95 minutes played at Firhill today to find their winner against Raith Rovers. The Jags put on a dominant display against John McGlynn’s side but struggled to find that clinical edge to open the scoring until Kyle Turner popped up with his first Thistle goal deep into stoppage time. The win brings Thistle back to within three points of the top four and two points of today’s opponents. Jags boss Ian McCall spoke to ptfc.co.uk following the final whistle:

“I thought we were excellent today, I really did. We were up against a good team but we took the game to them and thoroughly deserved to win I thought. We had chances early on and felt we should have been ahead at half-time and then that continued into the second half.

“It probably suited us a bit more when it was 11 v 11 because it was more open. Obviously, when they get the red card the emphasis is on us to go and create but it was difficult because they were defending well. That being said we still had more chances and the finishing just wasn’t there.

“You get into injury time and it’s looking less and less likely that something’s going to happen but we kept believing and kept pushing and we got our reward. As I said, I thought the performance deserved three points.”

Heading into a spell of three games in eight days starting on Boxing Day at Inverness, McCall says the momentum gained from today’s win could be massively important.

“We wanted to bounce back after a disappointing game last week and that’s exactly what we’ve done. It tightens things up at the top again and Raith have been on a brilliant run but we’re only a couple of points behind them so that tells you that we’re not doing too bad ourselves.

“We now head to Inverness in good spirits. It’ll be a really tough game but Hamilton won there today so we have to go there with plenty of belief that we can get another huge result.”

For a long time during the game it looked like Thistle were going to have to settle for a point and the gaffer he felt elated when the Jags finally found a breakthrough.

“Those kind of games are really frustrating at times but it felt absolutely fantastic when that moment came. We could have easily been going home with one point and with everyone frustrated but you get that goal and everyone’s leaving with a smile on their face. When you get moments like that here at Firhill, it’s a very special place.”

Two of Thistle substitutes linked up to produce the winning goal and Ian was pleased for both of them to have a say in winning the match.

“It was great to see Ross MacIver get the assist. He missed a good chance last week but that’s how you want players to bounce back and, for Kyle, he dropped out the team but didn’t sulk and when he came off the bench he made a real difference to the team overall. That’s the attitude I want to see from my players because, as we saw today, it can win games.”

Further reaction from Thistle manager Ian McCall and match-winner Kyle Turner will be available for JagZone subscribers to watch tonight – log in to view.