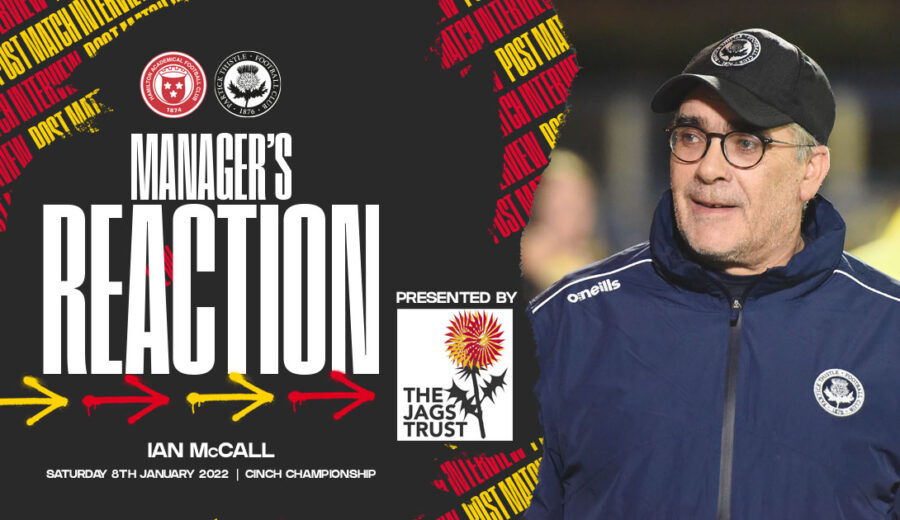 Partick Thistle returned to action for the first time since 18th December 2021 as they headed to the Fountain of Youth Stadium to take on Hamilton Accies. Having won each of the previous two matches between the side, honours were even this time as the sides played out an entertaining 2-2 draw. Goals from Scott Tiffoney and Zak Rudden had Thistle in front twice but a penalty from Andy Ryan and Mihai Popescu’s equaliser ensured Thistle headed back to Maryhill with just a point.

“It was a tough game for us when you consider everything that has happened over the last couple of weeks. We hadn’t played since before Christmas and I think, maybe, at times that showed. That said, we did have the chances to win the game and could have nicked it at the end but we’ll take our point and move on.

“There was maybe a little bit of rust at the start of the game and I thought with 25 minutes to go we’d run out of legs, but we went for our second wind in the last five minutes or so. We had a number of corners, one was cleared off the line and a couple took deflections that just landed on the wrong side of the goal from our perspective.”

Robbie Crawford made his Thistle debut completing the full ninety minutes and the gaffer was pleased with how he settled into the side.

“I thought he did well. What really helped is the understanding him and Ross Docherty already had from playing together so that made it a bit easier for him to integrate into the starting line up. He hasn’t played in a little while so he’ll only get better for us but I think he showed exactly why we went out to get him.”

Thistle led twice with goals from Scott Tiffoney and Zak Rudden and the manager was pleased they both got on the scoresheet.

“It was great timing to score the opener and a good hit from Tiffoney who I thought was electric today. He was a key player for us today and he had a great chance which on another day he takes and there were a couple of times where a better pass and we’re in a scoring opportunity.

“Zak’s goal was a natural, instinctive finish but it was a really well worked move for us. Richard Foster wins a ball he probably shouldn’t, Kyle Turner puts a fantastic cross into a good area and Brian Graham uses all his experience to set up Zak to finish from close range.

“Defensively we have been really good over the last couple of months but today we conceded a couple of uncharacteristic goals. The first one is just a couple of mistakes before we concede the penalty and the second is one we know we can definitely do a lot better at. I thought for most of the game we did well defensively but we were punished for the mistakes we made.”

It’s Friday night football at Firhill next week and it is one Ian is looking forward to.

“We’re looking ahead to the game this week, I’d prefer it to be on Saturday so we can a full week of training, I think that would really help but it is what it is. We’ll prepare as best we can and look forward to the game under the Firhill floodlights.

“We missed our fans today, but we know we can get 500 into Firhill next Friday and I know they’ll make a lot of noise and get right behind the team for what should be a terrific match.”