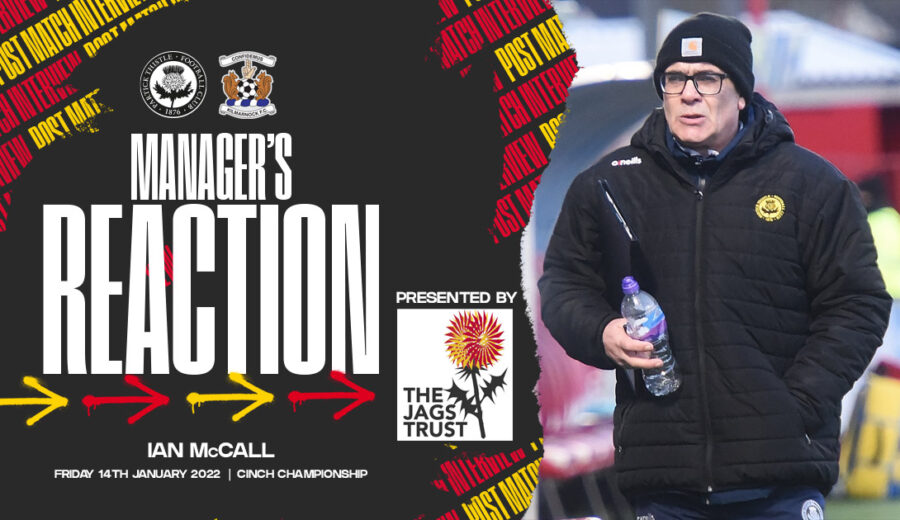 Firhill hosted its first game of football of 2022 as Kilmarnock came to Maryhill this evening for some Friday night action. The Ayrshire side were 2-0 winners away from home against Thistle earlier this season and looked set to take another three points from Glasgow after Oli Shaw’s controversial second half penalty, however, Ross Docherty popped up with a captain’s contribution in the 88th minute to secure a point for his side. Jags boss Ian McCall spoke to ptfc.co.uk after the game:

“I thought we were the better team for most of that game. We controlled the middle of the park and the two guys at the centre of that were Ross Docherty and Stuart Bannigan. At the end of the day, to score late like that to earn a point is a great feeling but we thought we shouldn’t have been in that position in the first place.

“We’ve seen the penalty incident back and we feel really hard done by on that one. If that one is a penalty then the one in the first half when Kevin Holt is going forward should be a penalty too but look, the credit goes to the boys for bouncing back from that and making sure it didn’t decide the game.”

Reflecting on the first half, the gaffer felt his team were able to find some good positions although they should have made more of them.

“There were moments when we looked really dangerous but we didn’t make the most of it. One drops to Doc at the edge of the box but he gets it all wrong and Tiff had a chance to shoot which he didn’t take. We did have one really big chance with Cammy Smith but credit to their defender who makes a great block to keep it out.”

The team had to wait until two minutes from time to get their leveller and the manager was full of praise for his squad’s attitude when chasing a goal.

“We had to push right until the end and we did that. It’s a group of players who I know will give their all and will always show that pride while they’re on the pitch. The subs who came on were the same and I thought Kyle, Brian and Ross all contributed well to the way we finished the match.”

Although the fans who were in the ground made plenty of noise, McCall said he couldn’t help but think about what it would have been like with an unrestricted capacity.

“They gave us a great backing tonight and it didn’t sound like only 500. I just wish we could have had a few thousand Jags fans in tonight seeing the way the team battled and fought to get the draw. I’ve said since I came in that the link between the crowd and the team is very important to me and hopefully the supporters appreciate the guts the boys showed tonight.”

Now Thistle look towards a cup clash with Airdrieonians at Firhill as the Maryhill look to reach the next round of the Scottish Cup but Ian says he expects a stern test from the Diamonds.

“They’re a good team who are doing well in League One at the moment so it won’t be an easy game at all. We go into it with plenty of confidence and belief though and will be looking to get into the next round. Also, we’ll be welcoming more fans back in and I’m hopeful we’ll see a really good crowd for that game.”

Further reaction from Thistle manager Ian McCall and Ross Docherty will be available for JagZone subscribers to watch tonight – log in to view.