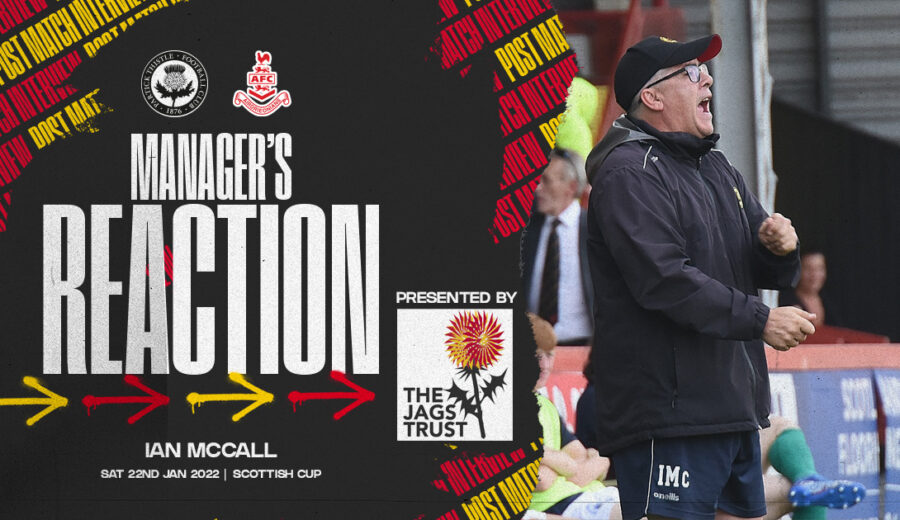 Despite playing almost 40 minutes with ten men after Tunji Akinola’s second half red card, Partick Thistle secured progression in the Scottish Cup this afternoon with a 1-0 win over Airdrieonians. The Jags were looking good at half-time after Brian Graham had put them in front on 25 minutes, however, they ended up with their backs to the walls towards the end of the game after Akinola’s controversial dismissal. The Maryhill men battled and fought to keep the Diamonds at bay and were able to secure the victory and a spot in tonight’s fifth round draw. Jags boss Ian McCall spoke to ptfc.co.uk after the game:

“Defensively we were absolutely brilliant in the second half and I’m really proud of the team after that. There are two decisions that we feel have gone against us but the boys stuck to it and gave everyone to make sure we won that game.

“It’s the Scottish Cup at the end of the day and it’s all about getting the win. Jamie Sneddon was good again, Lewis Mayo and Kevin Holt did a great job and we had Robbie Crawford and Stephen Hendrie doing excellently off the bench. It needed to be a real team effort after the red card and that’s what we got.”

The Jags got in front after 25 minutes as Brian Graham tapped home Cammy Smith’s square pass but McCall admitted Airdrieonians were probably the better side in the opening exchanges.

“To be honest, we were pretty slack at the start of the game while they were sharp from the first whistle. It took us a while to grow into things and a lot of that is down to our midfielders. Banzo and Doc started slowly but really found their rhythm around about 20 minutes in and that’s when we started to dominate and create chances.

“Zak has a great chance and Tiff hit the post as well so we could have been two up but overall we were really pleased with the way we finished that first half.”

The team’s plans for the second half were turned upside down by the sending off so the manager was delighted to see them adjust to the situation in the way that they did.

“The game turns on that moment really. At that point it becomes a question of how well we can defend and thankfully we can defend pretty well at the moment. Stephen Hendrie comes on and Holty moves into the centre and, as I’ve said, I thought the whole defence did well.

“They used the long throws, they had some corners, the goalkeeper was up at the end but we stood strong and showed the kind of determination that you need to grind out a result like that. I can’t actually remember them having many real sights of goal so that’s credit to the full team.”

Now Thistle look forward to a trip to face Arbroath next weekend in the cinch Championship and the gaffer knows it’ll be a game with huge ramifications at the top of the table.

“I have said that the games against the bottom five might decide this league but there’s no getting away from the fact that this is going to be a big one. We didn’t do anywhere near well enough last time against them so we want to put on a much better performance this time round.”

Further reaction from Thistle manager Ian McCall and Ciaran McKenna will be available for JagZone subscribers to watch tonight – log in to view.