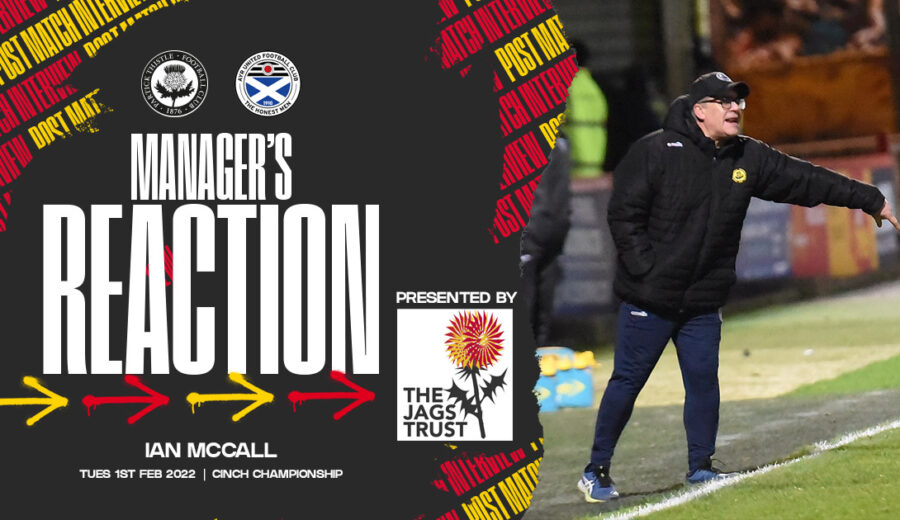 The unbeaten start to 2022 continued for Partick Thistle as they beat Ayr United 1-0 in the cinch Championship this evening. A single Brian Graham strike early in the second half proved to be the difference as he scored his fourth goal of the season against the Honest Men and his 15th in all competitions for the Jags this term, becoming the first Thistle player to hit that mark since Kris Doolan in 2016/17. The win doesn’t move the Maryhill men up any places in the table but they now sit just five points off the top of the league with at least one game in hand on each of the teams ahead of them. Jags boss Ian McCall spoke to ptfc.co.uk following the final whistle:

“That was a really tough game and you could see there’s been a huge improvement in  Ayr since the last time we played them. Saying that, I did think we deserved to win the game. Brian and Cammy had good chances in the first half and then we had a few moments in the second half but we’ll take the 1-0 because all that matters are the three points at the moment.”

Thistle top scorer Brian Graham popped up with the all-important goal and the gaffer was delighted to see his number nine producing once again.

“He’s such an important player to this team in a lot of ways but you’re always going to judge a striker on the goals he scores and he scores some important ones for us. The goal was actually a really well-worked one which started in the defence and moved through the midfield and then when Brian runs onto it, you usually back him to score.”

Robbie Crawford provided the assist for Graham’s winner and Ian was pleased to see one of his January signings contributing at the top end of the pitch.

“Robbie’s a player who I think has the ability to be a real creative force in attack but it’s about unlocking that. Each game he plays you can see him getting more and more comfortable and he’s showing more of that side of his game. The pass for Brian was brilliant and I think that’s something we’ll see more of going forward.”

The Jags used four of their substitutes on the night with Stephen Hendrie, Alex Jakubiak, Kyle Turner and Ross MacIver coming off the bench and the manager was happy with their contributions.

“It’s going to be a very busy period for us over the next month so everyone has to play their part. Stephen has come off the bench in our last two games and done a good job which is great to see. Ross and Kyle both did well too, helping us keep the ball up the other end.

“As for Alex, I thought he looked pretty sharp and had a couple of great moments. He’ll get a bit more time training with the team over the next few days and that will only help him in getting to know his teammates and building his sharpness even further.”

Now the team look forward to another Firhill fixture on Saturday afternoon as Queen of the South visit Glasgow and McCall says all focus now turns to that game.

“We can’t afford to let our attention slip. Each game is going to be difficult and they’re only going to get harder as we get closer to the end of the season and points become even more important. Queen of the South made it really difficult for us last time we played them and we’ll expect another tough one this weekend.”

Further reaction from Thistle manager Ian McCall and Robbie Crawford will be available for JagZone subscribers to watch – log in to view.