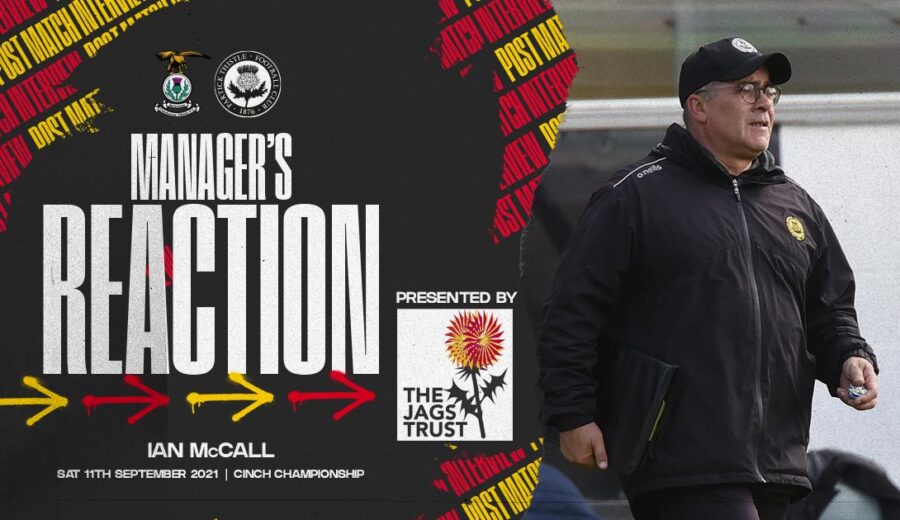 Partick Thistle suffered late heartbreak in the Highlands this evening as they conceded in second half injury time in a 3-3 draw with Inverness Caley Thistle. The Maryhill men led the game three times but were pegged back on each occasion as Billy Dodds’ side fought back to claim a point. An early own goal and two Brian Graham strikes put the away side in control at various points of the game but the hosts answered through Billy McKay, Shane Sutherland and Kirk Broadfoot whose deflected header in the 93rd minute denied the travelling Jags the three points. Thistle boss Ian McCall spoke to ptfc.co.uk following the game:

“Everyone is devastated in that dressing room right now because we were so close. We felt we edged it and obviously it feels ten times worse when you concede so late on. It’s difficult to be too hard on them though because they put so much into that game and have been excellent for me over the past few months.”

Thistle conceded in added time at the end of each half and the manager felt that was unlike his team.

“The timing of those goals was a real sucker punch and it’s not something we’ve done much this season. Certainly over the last 15 or so games we’ve been pretty tight in key moments but tonight those two goals at the end of the halves cost us.

“Both come from set pieces which was frustrating as well. The one in the first half, we allow a header on goal from about five yards out and there’s only going to be one result with that. Then for the third one is a second phase delivery and our marking is loose. The header takes a big deflection which takes it in but we still have to do more to challenge that.”

McCall says there’s no time to dwell on the draw though with a big cup tie against Dundee United coming up this weekend.

“We need to regroup. It’s a difficult one to take but we know there’s not going to be much time between games this month. The cup tie is one to look forward to and we’ll go into it with the belief that we can get into the next round.”

Finally, the boss complimented the contingent of brave Thistle fans who made the trip up to Inverness and made their voices heard.

“They were fabulous tonight. It was a tough night to travel in and a cold one to watch football in but they were still singing and shouting right until the end. We’re just annoyed we couldn’t reward them with the win.”

Further reaction from Thistle manager Ian McCall will be available for JagZone subscribers to watch – log in to view.

We’ll also have extended highlights and a full game replay of today’s match on JagZone.