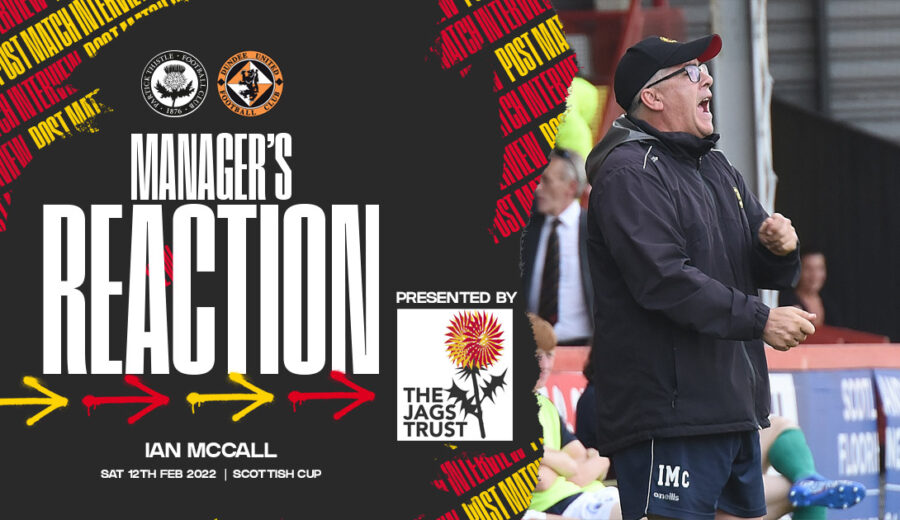 Partick Thistle suffered a frustrating defeat at Firhill this afternoon when they took on Dundee United in the Scottish Cup fifth round. The Jags put on an impressive performance and created many chances but unfortunately Dundee United took the lead towards the end of the first half with a blistering shot from Ian Harkes which ended up being the only goal scored come the full-time whistle, knocking the Jags out of the cup. Thistle boss Ian McCall spoke to ptfc.co.uk following the game:

“It was a tough game overall, we were in charge of the game from the start and really took it to them. The chances just weren’t falling for us out there. It’s obviously frustrating to go out of the cup, but I can’t fault the performance of the players at all today.”

“The team played brilliantly out there today and I’d say we, at the very least, deserved to have the game go to extra-time.”

The gaffer had specific praise for winger Scott Tiffoney who was at the centre of much of the Jags’ attacking play.

“Tiffoney was in fantastic form and whenever he had the ball he was a threat. He was using the ball to move us up the pitch and he had a couple of decent half-chances himself. He’s been consistently threatening for us over the past few weeks and hopefully that’s something that carries on for the rest of the season.”

Although the Maryhill men lost the match, McCall said he was proud of the team’s defensive efforts.

“Defensively we were the great. When you look at their chances and consider that their only shot on goal was a half-volley from 20 yards, that tells you how well we defended. Not to take anything away from Harkes as it was a great strike but it’s disappointing that’s what beat us.”

The manager finished by looking ahead to an important run of upcoming games in the cinch Championship.

“We have a lot of games in a small space of time coming up and we are heading into them with a positive mindset. If we can play anywhere near as well as we did today in most games then we’ll be doing well. We now need to get ready for Friday night which will be a difficult game against Dunfermline.”

Further reaction from Thistle manager Ian McCall and Brian Graham will be available for JagZone subscribers to watch – log in to view.

We’ll also have extended highlights and a full game replay of today’s match on JagZone.