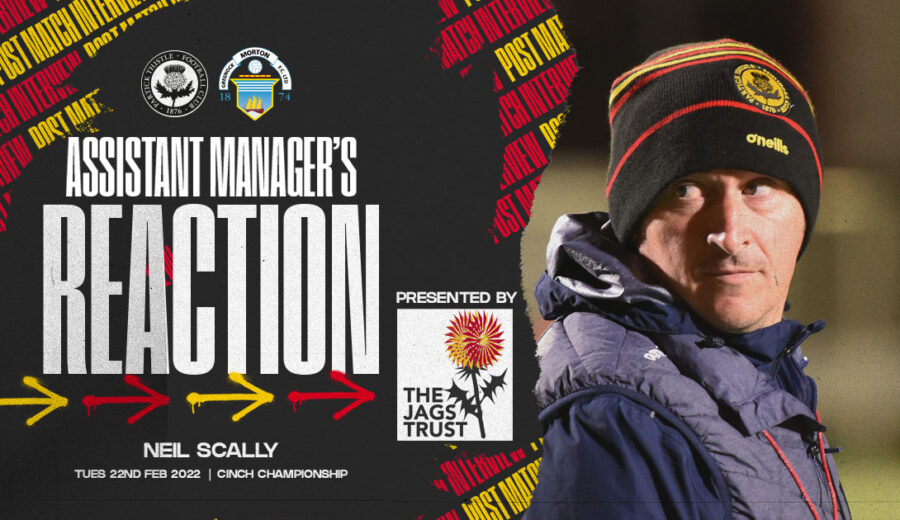 Partick Thistle missed the chance to move into third place this evening as they lost 1-0 to Greenock Morton at Firhill. The Jags, who had been unbeaten in 2022 prior to the game, were on top for much of the contest but were beaten by an 80th minute strike from Oisin McEntee after Brian Graham had missed a penalty earlier in the second half. Thistle assistant manager Neil Scally spoke to ptfc.co.uk after the game:

“We’re all really disappointed with the results because we felt we were the better side for the majority of the game. We had some good passages of play and found some good areas but ultimately we struggled to create in the final third.

“We started the game well with a couple of decent chances and felt like we were edging things. We got down the flanks quite a few times and had plenty of the ball but, as I say, the final ball wasn’t there. Sometimes the ball wasn’t falling for us but at times it was poor decision making as well. You have to be clinical to win in this league and we weren’t clinical tonight.”

Things seemed to be going Thistle way when, after a bright start to the second half, the Maryhill men were awarded a penalty but with Jack Hamilton saving Brian Graham’s spot kick Neil felt that shifted the momentum slightly.

“We came out flying for the second half and it felt like a goal was coming. We get the penalty, which I thought was definitely a penalty, and you thought that was going to be the moment for us. Unfortunately, the ‘keeper makes a great save and that seemed to galvanise them for the rest of the game.

“That being said, they still didn’t cause us many problems. They had a free-kick from 30 yards as their only shot on target apart from the goal as far as I remember and that’s frustrating for us.

“Our last game against Dundee United was similar. We controlled a lot of possession, we found some good spaces in the final third but we couldn’t turn that into clear opportunities.”

Now, Thistle look towards Saturday’s game against Raith Rovers as a chance to bounce back and Neil reckons it’s good the team have that game so quickly.

“It’s the sort of result that leaves a really bad taste in your mouth so we want to get it out of our system. Everyone in that dressing room is down after that but we can get ourselves back on track immediately if we go away from home and get a result in Kirkcaldy.

“It’ll be a very difficult game but losing tonight means each game takes on a bit more importance. We can’t make a habit of dropping points if we want to be moving up the table so Saturday now becomes an even bigger game than it already was for us.”

Further reaction from Thistle assistant manager Neil Scally is available to watch on JagZone – log in to view.