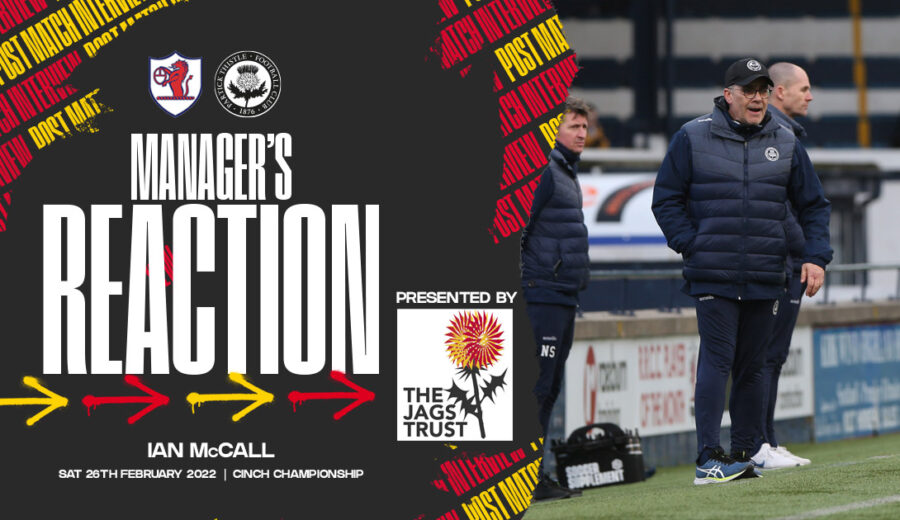 It was a point apiece at Stark’s Park as Partick Thistle battled out a goalless draw with Raith Rovers. In an evenly matched game, both sides had chances to claim the decisive goal but neither goalkeeper was troubled much on a difficult day for football. Thistle manager Ian McCall spoke to ptfc.co.uk shortly after full time.

“I felt a draw was the right result for today’s game. It was a pretty rubbish game of football played in pretty rubbish conditions today with the way the wind was swirling about and it can’t have been great to watch – I certainly didn’t enjoy watching it. Raith were the better side in the first half, although we did really well defensively to restrict them to practically nothing.

“In the second half we came into it more and I felt we had the better chances in that second half. When you look at the results around the league, there was only one goal in four games which is pretty mad but we’ll take the point and head back to Glasgow to get ready for Tuesday night.”

“John changed his style of play today for Raith which caught me a little by surprise, they usually play a little bit more but I felt we adapted well to it. In the first half we tried to build but it didn’t really work. We made the subs at half time with the view to going a little bit longer and we’ve had a couple of good chances but I felt we were worthy of our point.”

It;’s another clean sheet for Thistle – their first since the start of the month with the gaffer pleased to re-start that particular habit.

“I thought Lewis Mayo had a really good game this afternoon. The standards in the defensive zones has been really high this season, I think that is something like our 17th clean sheet of the season so we’re pleased with how we played defensively. Richard Foster put in a real shift for us today after being missing for almost four weeks. Stephen Hendrie did well on the left hand side so there is plenty to be happy with, albeit we’d like to have added a goal to the game.”

The busy football spell continues with a trip to face Arbroath on Tuesday night with Ian looking for his players to recover ahead of another tough cinch Championship match.

“It’s all about recovery for the next couple of days. It was a really tough game for us today but it is the same for Arbroath, they had a really tough one at Cappielow. We’re going away to the league leaders and we’ll be looking to pick up three points but talking about it and actually doing it are two completely different things. We’ll prepare for it and look forward to it and see what Tuesday night brings.”

Further reaction from Thistle manager Ian McCall is available to watch on JagZone – log in to view.