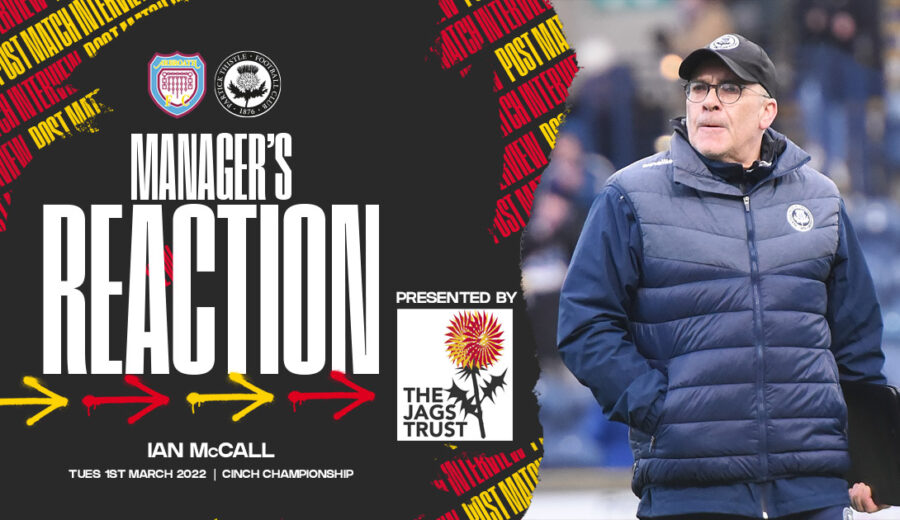 It was another point on the board for Partick Thistle as they climbed into fourth place with a 1-1 draw against Arbroath at Gayfield Park. The Jags trailed early through a Colin Hamilton goal and found themselves under a lot of pressure from the Red Lichties during the first half, however, after getting to half-time with no further damage done they produced a much-improved second half performance. Ciaran McKenna popped up with his first goal for the club to restore parity before the Maryhill men pushed for a winner which they couldn’t quite find despite having the better of the closing stages. Thistle boss Ian McCall spoke to ptfc.co.uk after full-time:

“It’s a point that we’re happy with when we consider the entirety of the game because they started the game much better than us. We lose that early goal and suddenly they have their tails up and are making it very difficult for us to work our way up the pitch.

“The important thing was that we stuck to it and didn’t fall further behind. That then meant we could change things at half-time and I think you saw a big improvement after that albeit I do think we were growing into it at the end of the first half.”

Discussing the opening goal further, McCall felt his team could have done better with it although there was an unfortunate bounce in the build-up.

“It’s a bit unlucky from our point of view because the ball bounces back off Doc into their boy’s path. To be fair, it’s a really good finish but that was a bit frustrating. Saying that, we could have done a couple of things better before it comes to that but when you concede that early, you have to regroup and in fairness to the guys, they managed to do that.”

The gaffer made two changes at half-time with Juan Alegria and Richard Foster coming on which he had a positive effect on the pattern of play.

“As I said, I thought we were growing into it towards the end of the first half but we still felt we needed to change some things. We brought Richard and Juan on and changed the shape as well and it definitely put us in a better position.

“We got the midfielders involved in the game a lot more and having Juan up front alongside Brian Graham gave them something a but extra to think about and it just freed up some more space.”

Towards the end of the game Thistle had the momentum and Ian felt the team could have taken all three points on that basis.

“We were much more dangerous overall in the second half and we had a good number of chances. The best one was probably Kevin Holt’s at 1-1. Connor Murray does really well to set him up and he just gets the angle wrong on the finish but going behind so early on way from home at the league leaders, we would have bitten your hand off for a draw at that point so we can’t be too disappointed.

“The draw keeps us in the fight. Losing would have made it really difficult for us but getting a draw just keeps us in a decent position. Now we’ve got a couple of big home games to contend with and if we can get positive results from those then we’ll put some real pressure on the teams at the top.”

Finally, McCall paid tribute to the Thistle fans who made the long journey to Angus on a Tuesday night to back the team.

“The support was fantastic tonight. It’s a tough journey to make in midweek but it was great to see them turn out in good numbers. Even when we were one down they were singing and willing us on so they deserve a massive well done for that.”

Further reaction from Thistle manager Ian McCall and Lewis Mayo will be available to watch on JagZone tonight – log in to view.