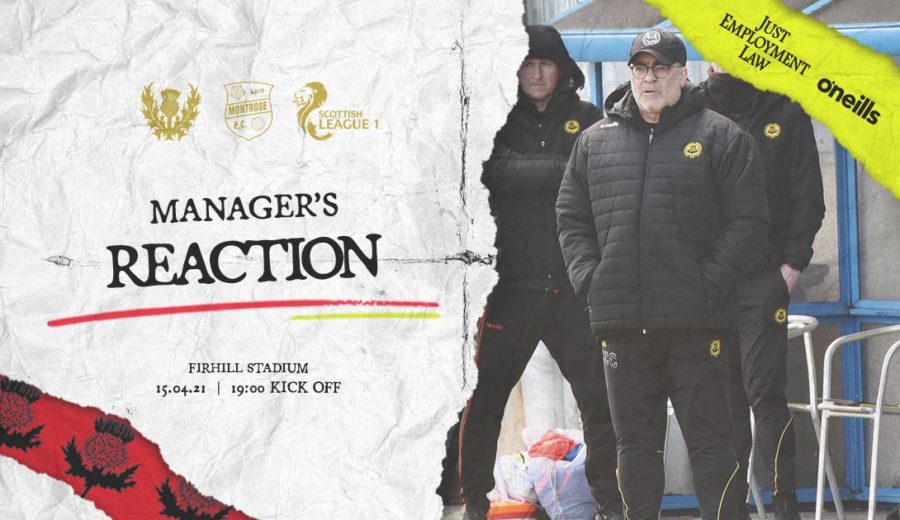 A ruthless attacking display saw Partick Thistle win 5-0 against Montrose this evening. The Gable Endies, who were only three points behind the Jags ahead of kick-off, were blown away by a clinical performance from the Maryhill men. Zak Rudden was on the scoresheet again with a first half brace to match his tally from Tuesday night against Clyde before second goals from Stuart Bannigan, Scott Tiffoney and Shea Gordon put some gloss on the scoreline after the break. Thistle manager Ian McCall spoke to ptfc.co.uk following the final whistle:

“It was very good tonight, very good. There were plenty of good individual performances in the game but as always it was about getting the result against a good team and we did that. Now we are able to recover and wait to see how things pan out at the weekend.

“We look like winning games just now and the confidence is there in spades. Tonight showed everything good about what we’ve done this past week to the fullest extent and we’re delighted with the performance at both ends of the pitch.”

The 10 goals Thistle have scored over their last three games are a signifier of the improvement that has been evident in attack for the Maryhill men since football restarted last month and the gaffer reckons there a few factors that have contributed.

“Scott Tiffoney has made a big difference, everyone can see that because the numbers speak for themselves. He’s given us something different. However, I think we’ve also just been more clinical as individuals. We didn’t score many during the first half of the season but we passed up some serious chances and we’re not doing that anymore.

“On top of that, injuries were a big problem earlier in the season that has been better as of late. Zak Rudden is the prime example of a player who we were missing. It’s been great to see him scoring and to be able to start him alongside Brian Graham was fantastic. It was the plan over a year ago to get them together on the pitch but we’ve only been able to do it twice that I can remember.”

McCall expanded on Zak Rudden’s recent successes by complimenting the striker attitude in battling back from several setbacks over his time as a Jag.

“I’ve always believed in Zak. He’s a great player and there’s no doubt about that for me. I’ve always thought he just needed that bit of luck with avoiding injuries and he would be able to play a bit part for us. Look, it’s not been easy for him this past year but he’s reaping the rewards of his hard work off the pitch this week and everyone’s delighted for him.”

It was a third consecutive clean sheet for the Jags and the gaffer wanted to give specific praise to a couple of the team’s veteran defenders.

“I have to single out Steven Bell and Richard Foster because I thought they were absolutely magnificent. They’ve played three games in six days and been outstanding in each of those matches which is incredible at their age. Hopefully the younger boys see that as an example of how important it is to look after yourself.

“I think having experience in the team is extremely important and I’ve always tried to have a few guys like that in my squads. Richard Foster has been a real asset this season; he’s always trying to help the younger players out and I really hope they take on board everything he tells them.”

Further reaction with Thistle gaffer Ian McCall and Ross Docherty will be available for JagZone subscribers to watch – log in to view.