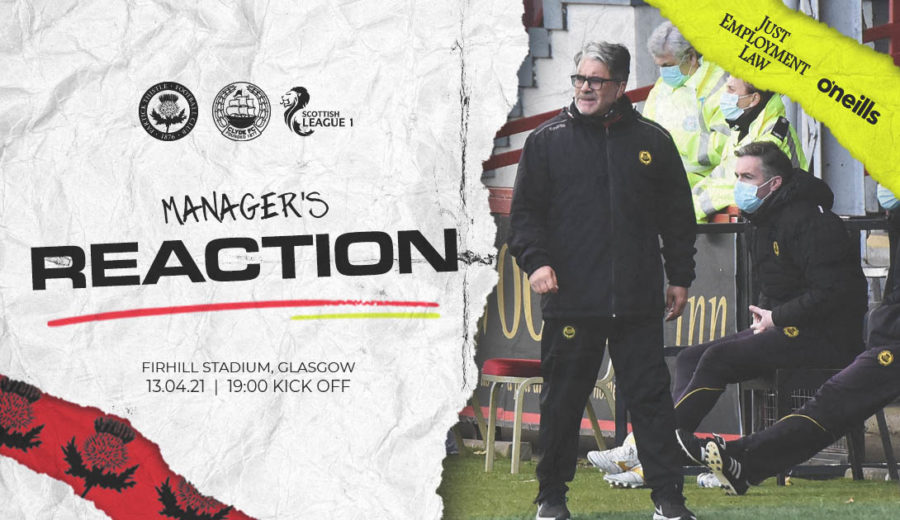 A Zak Rudden doubled fired Thistle to three crucial points against Clyde this evening as the number ten netted his first and second league goals for the club. Rudden, who was introduced as a second half substitute, broke the deadlock after 65 minutes as he forced Scott Tiffoney’s cross over the line before he added an impressive second in the 90th minute; controlling a high cross on his chest before rifling a low strike past David Wilson. The result moves the Maryhill men to within a point of Cove Rangers in second place and to within four of league leaders Falkirk. Thistle manager Ian McCall spoke to ptfc.co.uk following a satisfactory Tuesday evening fixture:

“I’m very pleased with the result. It was always going to be a very tough game but we kept pushing and got the goals that we deserved on the balance of play.

“Look, we weren’t at our best by any means and it wasn’t anywhere near as comfortable as Saturday but the important thing was the win. We got into plenty of good positions but the final ball wasn’t there which is strange when you think about how well we’ve been attacking as of late.”

Zak Rudden was undoubtedly the hero as he bagged two second half goals to secure the victory and the gaffer was delighted for the striker.

“Zak’s had a terrible time of it with his injuries and we’ve yet to see the best of him. It’s been so stop-start that he hasn’t had a proper run in the team but recently he’s had a few appearances here and there and he’s getting up to speed.

“He got that goal against Cowdenbeath which was great but you always want to get that first league goal. There have been chances for him in the games he’s played but it didn’t quite fall so we’re delighted for him tonight. They’re not just any goals either, they’re massively important ones that have won us a big three points so that should do him the world of good.”

Next up for Thistle is the visit of Montrose on Thursday evening and McCall knows there’s no time to dwell on tonight’s triumph with another big fixture right around the corner.

“We’ve now got two wins on the bounce which is great but there’s another game in two days. It’s not much time to recover but we need to get ourselves ready for what will be a really difficult game against a good Montrose team.

“Five goals and two clean sheets in our last two games should give us confidence going forward and hopefully we can put a run of results together. Every game is vital now but we feel like we’re on the right track.”