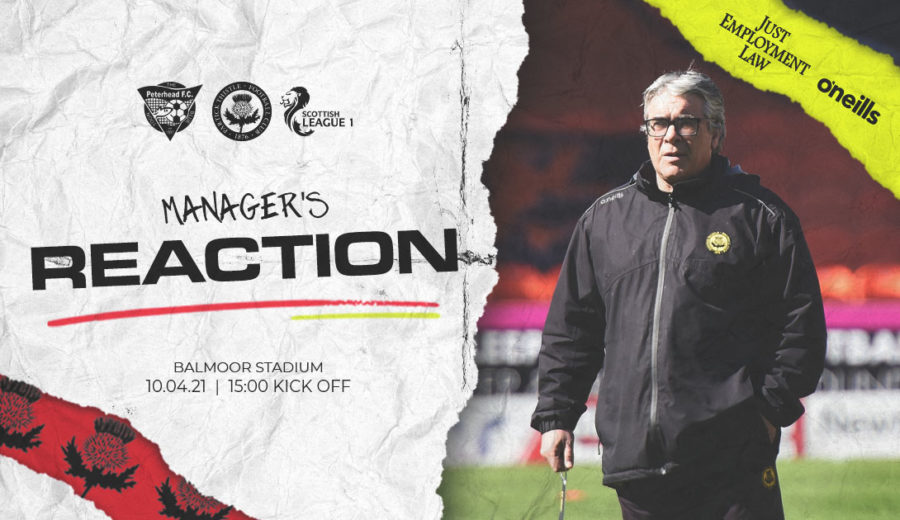 The long trip north to Aberdeenshire proved to be a worthwhile one for Partick Thistle this afternoon as the Jags claimed a convincing win over Peterhead. The Maryhill men drew disappointingly with East Fife on Tuesday but shook off their midweek malaise to secure all three points at Balmoor thanks to goals from Joe Cardle, Scott Tiffoney and Brian Graham. Cardle opened the scoring just before half-time by finishing off a good passing move before going on to set up Scott Tiffoney shortly after the break to make it 2-0. Brian Graham rounded things off with a header that bounced in off the post; his fourth strike since the restart. Jags manager Ian McCall spoke to ptfc.co.uk following the final whistle:

“I’m delighted with that performance and it’s exactly what we’ve been crying out for all season, to be honest. We were professional, we defended well and we killed the game off when we got the chance to which just made it comfortable for us later on.

“To get three different scorers was great as well. We’ve looked a much better attacking team recently and we continued that today but we were comfortable at the back for the majority of the game too.

“This was never going to be an easy game and you could see that with the way the game started. Balmoor is a tough place to come to but we did a really good job today and were deserved winners really.”

After a relatively even start to the game, Thistle hit the front through Joe Cardle just prior to the break and McCall very much enjoyed the football played in the build-up.

“It was a really good goal and we know we have the ability to play like that. We’d been pressuring them for a couple of minutes and then Scott picks the ball up and gets it to Connor who shows some good quality to pick out Joe. It was a very nice goal at the end of a half when there wasn’t too much pretty football played.”

The scorer, Cardle, went on to grab two assists in the second half and the gaffer lauded the number seven’s contributions.

“He earned a place in the team with what he did on Tuesday off the bench and he showed today that he can do it from the start too. He’s been one of our best players since we’ve been back and his creative output this week has been magnificent.

“He showed great desire to get on the end of the second and set up Scott and then his set piece got us the third and his free kicks and corners are always a useful weapon for us. Hopefully he can continue this form for the rest of the season.”

Thistle now face games against Clyde and Montrose on Tuesday and Thursday night respectively and Ian hopes the win this afternoon will give them some momentum going into those contests.

“It’s the start of a massive week for us. We don’t have much time for recovery because we’re straight back into it on Tuesday and then Thursday again but a good win like today’s should give us a bit of confidence and hopefully we can use this busy week as a chance to put a run together to get us up this table.”

We’ll also have extended highlights and a full game replay of this afternoon’s match on JagZone later – log in to view.