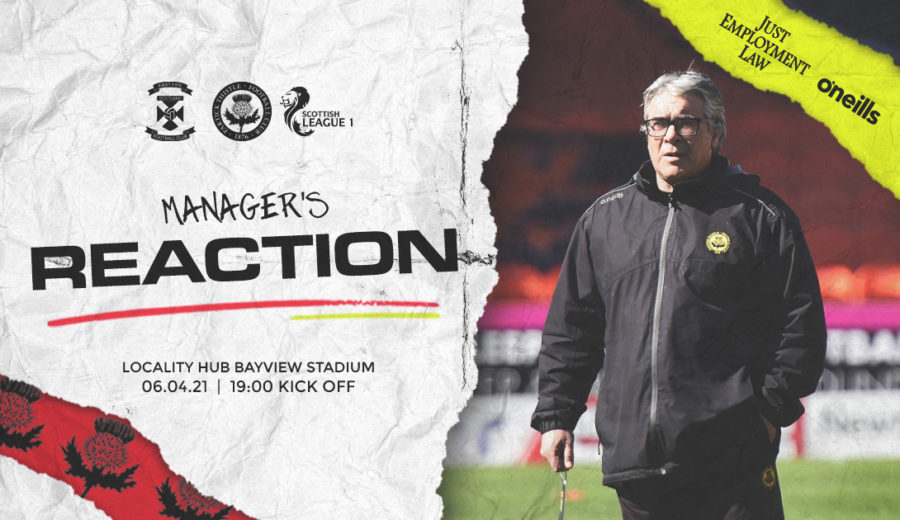 It was honours even at Bayview Stadium this evening as Partick Thistle drew 2-2 with East Fife in Methil. The Fifers raced into a two-goal lead in the first half and missed a huge opportunity to go further ahead when Danny Denholm fired over the bar from close range just before half-time. The pattern of the game then changed as Thistle came out for the second half on the front foot with the hosts sitting off and inviting the Jags to attack. Brian Graham provided the breakthrough for Thistle with a powerful header to cut the deficit before the number nine’s header then set up Scott Tiffoney for a tap-in in injury time, earning the Maryhill men a point. Jags boss Ian McCall spoke to ptfc.co.uk after the conclusion of the contest:

“It was the typical game of two halves for us because we were very poor in the first half and East Fife could have had more than two if we’re being honest although we maybe should have scored as well. We were all over the place at the back early on and it cost us.

“I feel like if we’d got that equaliser about ten minutes earlier then we would have gone on to win because it was essentially one-way traffic for the second half and you could see the pressure building with a few half-chances that we didn’t take.

“Look, East Fife have the best home record in the league and this isn’t over yet for us by any means. Our game in hand is hugely important and if we can get close to Falkirk by the split then we’ve still got a chance here.”

The gaffer used all five of his available substitutes as he looked to bring the Jags to life including three half-time alterations and he feels the players who were introduced had the desired effect.

“The substitutes made a difference without a doubt. Ciaran McKenna I thought was great; he’s got the makings of a really good player and I like what I see with him. Joe Cardle was terrific as well when he came on and obviously you can’t ask for a much better impact than two assists to get us a point.

“I also thought Steven Bell played his part well. He helped just calm things down at the back after a really poor first half at the back and his experience was huge.”

Scott Tiffoney popped up in the 95th minute to notch his fourth goal since joining the club on loan and Ian once again heralded the attacker’s goalscoring touch.

“I don’t think Tiff was actually at his best today. He had a few moments where he looked good but I don’t think he quite got into a rhythm. Saying that he always has his pace and a goalscoring instinct that’s served him well since he joined and he was in the right place at the right time for the leveller.”