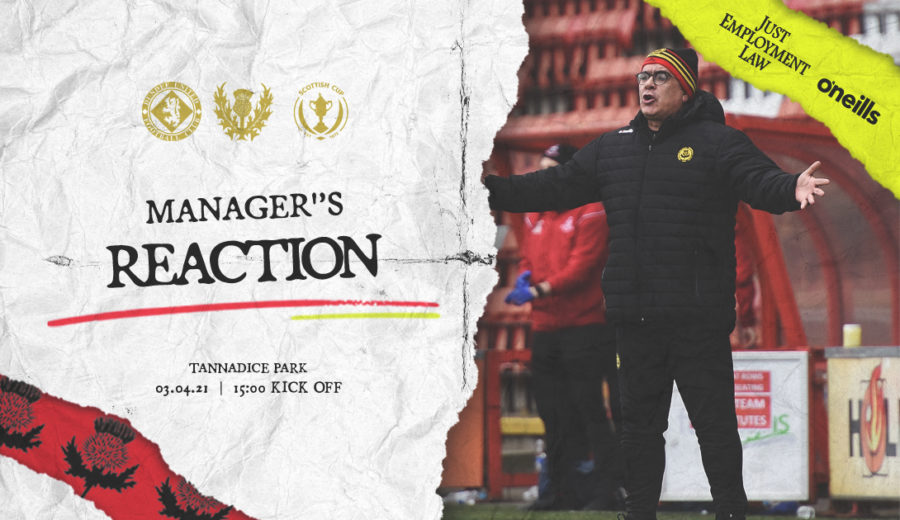 There was late heartbreak for Partick Thistle as their Scottish Cup journey ended for the season at the hands of Dundee United this afternoon. The Jags took a first half lead at Tannadice as Scott Tiffoney headed the Maryhill men in front and looked much the better side for the opening period but goals from Lawrence Shankland in the 79th minute and Nicky Clark in the 90th sent the hosts through to the next round. Thistle boss Ian McCall spoke to ptfc.co.uk following the final whistle:

“Look, it’s a really tough one to take because we felt we should have won. We feel a bit hard done by because we thought we should have had a penalty, there was an incident with Brian Graham and a shove on Mouhamed Niang for the winning goal which is all very frustrating.

“The guys can be very proud of how they performed; they played some really nice football throughout the game, showed a lot of energy and looked like the better side for long spells and that’s up against a Premiership team.”

The Jags hit the front after 25 minutes as Scott Tiffoney got on the end of a flick on from Ciaran McKenna’s long throw to nod past Deniz Mehmet but McCall was disappointed that the team weren’t able to add to that lead.

“Scott’s showing exactly what we brought him here for and at that point we were well on top. It was just a shame we didn’t go and get that second goal because we were terrific in that first half and had the chances. Brian has one at the back post that he’s just stretching for and then Shea Gordon gets in behind but just rushes himself a bit. If it had been 3-0 at half-time it wouldn’t have flattered us.”

Coming out for the second half, United were on the front foot as they searched for an equaliser but it took until the 79th minute for them to get it though Ian felt it was an avoidable goal.

“We’d done well holding them off at the start of the second half and we felt like we’d weathered the storm really. Kieran Wright made one good save and we cleared one of the line but after that they were getting a bit frustrated.

“Then their goal comes from a move down the left and a simple ball into the six-yard box which we just didn’t deal with and it falls to Lawrence who was never going to miss from there. We’d been organised and compact for the majority of the game but that one moment costs us.”

The winner came in the game’s dying moments as Mouhamed Niang and Kieran Wright collided, allowing Nicky Clark to knock the ball into an empty net but the gaffer feels there was a foul committed on Niang.

“It’s just a big high ball up the pitch that lands right at the edge of the box and the boys were a bit indecisive but then their boy shoves Sena into Kieran and that’s why he has a tap-in. It’s a stonewall foul and it’s a really disappointing way to go out of the cup.”

Now the Jags look towards a midweek trip to Methil to take on East Fife in League One action and McCall hopes the team carry the positive elements of today’s performance into that clash.

“Tuesday was always a bigger game for us than today and, to be completely honest, I’m glad we didn’t have to play extra time. Looking at the performance this afternoon, you can see the making of a really good side and hopefully we carry the energy and quality that was on show today into that game at East Fife which is a huge one.”

We’ll also have extended highlights and a full game replay of today’s match on JagZone this evening – log in to view.